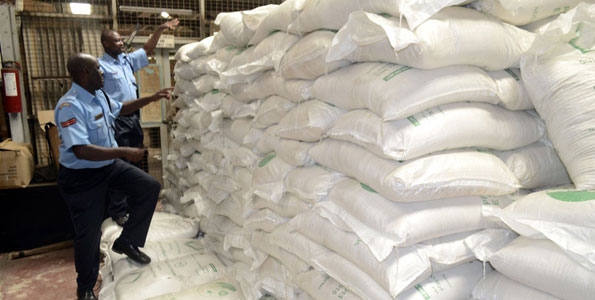 [dropcap]A[/dropcap]s consumers indulge their craving for sweets, official statistics show that Kenyan sugar imports have dropped a whopping 72% year-on-year as the Sugar Directorate moves to control quantities of the commodity coming in across the border. A market report by the country’s regulator boasts that the volume of the imported sweet stuff has plummeted to 9,907 tonnes compared to a four times greater figure of 35,170 tonnes the previous period.

These figures are to be taken with  a Cartesian doubt : despite these promising official numbers, in fact the illicit sugar industry is thriving nationwide. Due to corruption, Kenya Revenue Authority (KRA) is fighting a losing battle in its bid to reign in the sugar industry – as long as cartels pull all the strings, the outcome for government coffers and much needed funds for public health initiatives will be far from sweet.

On  March 22nd this year, a convoy of 25-tonne trucks was stopped by Kenya Police Reservists (KPRs) guarding the border with Somalia. The 10 trucks were operating a well-known smugglers’ route in the area known as Wajir East, and were suspected of attempting to import hundreds of sacks of sugar to evade both import restrictions and quality controls.

In the ensuing standoff between the smugglers and the authorities, the KPRs stood their ground –  that is, until they received a call from a senior police officer to let them pass, thanks to a web of alliances developed by smugglers. After the incident was reported in local media and audio clips were uncovered in which the senior officer instructs the KPRs to “reach an agreement with the smugglers”, one of the KPRs involved suspended and had his gun taken away.

READ: The world’s oldest person is a woman living in a Kenyan village

This saga is far from an isolated incident: it is symptomatic of an intricate, and well-documented, network of cartels that stretch from refugee camps in Kenya’s northeast across the border with troubled Somalia. Brokers are well-connected, and bribes of as much as Ksh130,000 (USD 1,289) are shared along the countless smuggling routes between the two countries. With the illicit sacks putting downward pressure on prices nationwide, Kenya’s local sugar industry is already feeling the heat. The failure to crack down on this parallel market has broad consequences.

The fight against the underground sugar trade isn’t just taking place at the border. The Kenya Revenue Authority (KRA) is attempting to rein in the sale of illicit soft drinks and other non-alcoholic beverages in a crackdown on tax non-compliance, and had planned to extend its successful Excisable Goods Management System (EGMS) to non-alcoholic drinks.

Given the clout the sugar industry holds, it was no surprise when a law extending track and trace scheme sugary beverages was struck down last month.

The EGMS, which features high-tech excise duty stamps developed by Swiss firm SICPA, has been in operation in Kenya since 2013. The track-and-trace scheme was first implemented on tobacco, wines and spirits, netting the taxman an additional $57 million in annual revenue and cutting down on illicit consumption.

The EGMS’s impact was amplified by the launch of the Regional Electronic Cargo Tracking System. This scheme enabled real time tracking of transit cargo between Kenya, Uganda and Rwanda, and saw the attachment of thousands of magnetic tracking gadgets overseen by command centres in all three capitals.

Unfortunately, given the clout that the sugar industry holds in Kenya, it was no surprise when a law extending these programmes to the tracking of sugary beverages was struck down last month, with the High Court ruling that the legislation was inconsistent with the Constitution. Just days before KRA was set to begin applying the EGMS to non-alcoholic drinks, the High Court ordered the regulator to return to the public participation phase and, ultimately, redo the track-and-trace tender from scratch.

Corruption is robbing Kenya of billions in tax money — which could otherwise be used to stimulate the economy, undermine the dark underbelly of the region’s smuggling operations and provide affordable health care to a people who are already adversely affected by excessive sugar consumption. With the soft drinks industry spending millions in advertising year on year, Kenya’s health burden, thanks to diseases such as diabetes, is growing. The National Hospital Insurance Fund (NHIF) has pledged to increase the number of Kenyans under its cover from 26 million to 46 million by 2020, but without adequate government funding, Kenyans will be forced to go without for decades to come.

Kenya’s illicit sugar trade has impacts that stretch far beyond the agricultural sector. While some of the country’s barons enjoy the spoils of regional cartel trading, and government officials fight for scraps of incentives flung their way, it is every day that Kenyans are paying with their health — and the long-term health of their country as well.

NEXT: Uncertainty over sugar as COMESA deadline lapses