Radio Africa Group today kicked off its much-awaited staff rationalisation through which it seeks to push out over 100 employees, including journalists.  The layoff, which was put off last year after a backlash over the inhuman way they had sacked one of the editors, resumed after rolling out a new management software that left some workers and their managers redundant.

The Enterprise Resource Planning Software (ERP Software has automated many managerial tasks and now employees can just update their daily tasks with reports being generated automatically.

The hearts of Radio Africa managers, though, appear not to have thawed any bit. Among the first people to be sacked is a pregnant woman. Ms Sheila Jemutai, who is due next month, and her colleage Maureen Osindo, were literally placed between two horns of a dilemma. They were asked to resign or get sacked, according to inside sources at Lion’s Place, the headquarters of Radio Africa Group, which runs a number of radio stations including KISS 100, Classic 105, Radio Jambo, East FM, KISS TV and The Star newspaper.

Her colleagues are said to have been planning a baby shower for her.

Ms Jemutai was employed a few months ago and was still serving her probation period when the axe fell on her. It’s not clear why she was forced to leave so early, but it is understood she had “issues” with her boss over work-related matters. That could mean perhaps she was not delivering, but being sacked while expectant is likely to draw fire from the public.

For media houses, however sacking, of vulnerable workers is not a strange thing. In 2013, popular Kiswahili TV news anchor Ann Ngugi was fired while five months pregnant from K24, the TV station owned by President Uhuru Kenyatta’s family. This caused a stir in media circles.

While Radio Africa Group has a presence in print, broadcast and digital, it has been struggling to make money from advertising from its Star newspaper and most of its radios except Classic 105, which remains the cashcow. It’s newspaper circulation has been falling over the past two years to, according to one advertising agency executive who asked not to be named, the lower 20,000’s. Its radio stations, too, have been dwindling in popularity.

POPULARITY OF RADIO STATIONS AS AT APRIL 2016

Classic 105, for example Classic 105 has dropped from the top to number five most listened to radio station in the country, while Radio Jambo has gone down from position 2 to 3, after market leader Royal Media Services-run Radio Citizen and Radio Maisha owned by the Standard Group. According to research commissioned by Radio Africa and seen by BusinessToday, Radio Citizen leads in the national reach ranking with 49% reach, followed by Radio Maisha 42%, Radio Jambo 37%, Milele FM 33%, while Radio Africa’s money-minter Classic FM trails at 30%, followed by Kiss 100 at 26%. 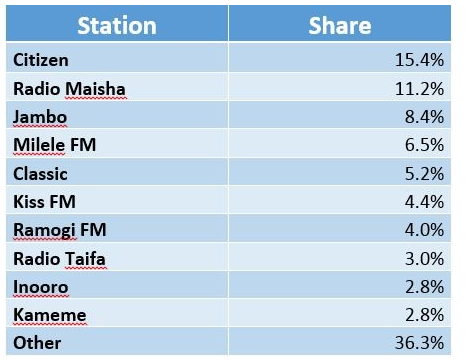 Even in the Nairobi category, which largely determines the success of a media house including TV stations and newspaper due to its high population density and access to media channels, RAG’s Radio Jambo with a 51% trails Citizen radio 54%, followed by Classic 105 51%, Milele FM 41%, Radio Maisha 39% and Kiss 100 at 33%. 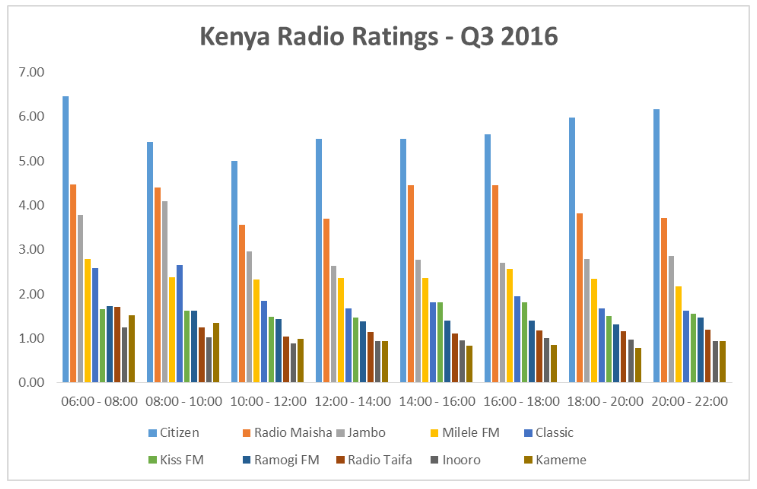 Most sales representatives and journalists were put on notice mid last year by Group CEO Patrick Quarcoo to meet their targets or leave the company. A number of them panicked and left to pursue other interests or to join rivals like Royal Media Services. Now it’s judgement time for those who stayed the course, with tension rising as meeting targets has become about as hard as finding a once-plentiful commodity: fans of Kiss 100.

Also See >> Anne Ngugi, sacked while pregnant, back on TV

Some of the sales people who left earlier complained about the management of Radio Jambo boss, Ms Catherine Waswa, who they accuse of ‘snatching’ business from them and allocating them to her friends and those of Group General Manager, Mr Martin Khafafa.

The sacking has stoked anxiety among Radio Africa staff, with other departments bracing themselves for the sack. The editorial department, which runs the journalism side of the business, will be closely watched since it underwent a mini-restructuring in August last year that pushed out some correspondents and writers. It is expected that this round will target some big heads.