The Kenyan Premier League new season is barely a week away and teams are currently on their final touches in preparation for the campaign. The new season begins on 30th August.

KPL clubs have been busy signing players during the league break as they hope to strip Gor Mahia of the title. Even Gor Mahia has been busy bolstering its squad to ensure they can successfully defend the title for the third consecutive season.

Business Today looked at the KPL transfer season and the players who are likely to bring a difference to their new teams.

Wazito FC have been the biggest spenders in this transfer window as they have signed a total of 9 players, almost a whole team. Burundian International Karim Niziyigimana is among the players Wazito signed ahead of the new season.

Nizigiyimana has experience playing in the KPL and also has a league title to his name. He won the league when playing for Gor Mahia during the 2016/17 season. The Burundian International is a crucial signing for Wazito as their defence was not good enough for the top tier.

Nzigiyimana joins Wazito together with other defenders to help reduce the number of goals conceded. Last season Wazito conceded a lot of goals for a title winner at the National Super League.

Odhiambo joined the Zedekiah Otieno coached side on a free transfer and links up with former teammate Stephen Waruru who had joined the bankers last month. He had already left Batoto ba Mungu and was linked with a move to a series of clubs with Gor Mahia and Wazito FC rumoured to have been interested with the player.

His stature at the Harambee Stars team under Migne saw him handed the armband in the 2020 CHAN Qualifiers two-legged tie against Tanzania where they lost in penalty shootouts. He comes with a wealth of experience having featured for Thika United and having been around the national team for some time now.

After a short spell abroad, Humphrey Mieno opted to come back to the KPL as a brewer. Mieno left St Georges after staying with the club for only 6 months even though he had signed a two-year contract with the Ethiopian side.

Mieno now returns to the club he once played for after being out favoured in Ethiopia. He has also played for 18-time KPL champions Gor Mahia which gives him vast experience in the local league.
He joins Tusker together with former Gor Mahia teammate George ‘Blackberry’ Odhiambo.

AFC Leopards have been chasing this Malian striker for about three years now. Finally,in this transfer window, Ingwe were successful in landing the highly-rated striker. He joined AFC Leopards from Rwandan side Rayon Sports. Ismaila joined Rayon a year ago after he had been heavily linked with Ingwe.

Apart from Ismaila, Ingwe have also signed 6 other players as they look to get the team back to winning ways. Leopards fans have been complaining that the club has not had a reliable striker in a while. Maybe, just maybe Ismaila is the guy Ingwe has been waiting for.

This is so far the biggest signing that Wazito FC have made in this transfer window. Wazito FC signed the Kenyan International from relegated side Vihiga United where he was captain.

Ochieng’ was part of the Kenyan squad that represented the country at the African Cup of Nations (AFCON) in Egypt. He has also been mentioned in Francis Kimanzi’s provisional squad to face Uganda in an international friendly.

Ochieng’ will be joining Captain Dennis Gicheru and Lloyd Wahome at the center to keep attacks at bay. 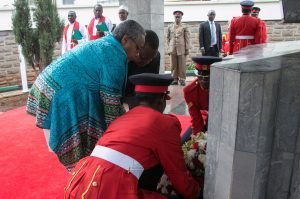 No More Jomo Kenyatta Public Commemoration, Uhuru
The commemoration will be the last after 41 years