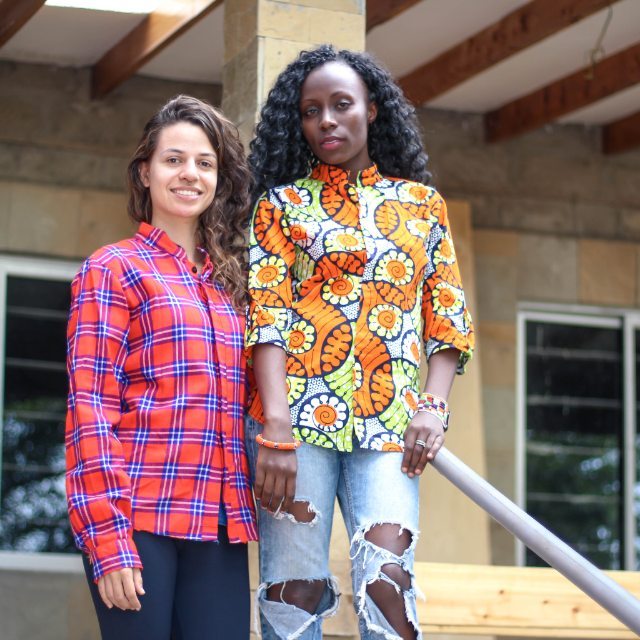 For Emmah Amoni Wambugu, a self-made designer and image consultant who runs Touyet Fashions, passion, creativity and a go-getter spirit are part of her brand.  “I quit sodas and processed juices because they are unhealthy for me,” she kicked off what turned out to be a revealing interview as she poured the glass of fresh juice for me. Her story is one of a straight up hustler who found a way to make it on her own.

Her story is one of perseverance and endurance. Before she founded Touyet Fashions, Emmah, 24, started off by selling second-hand clothes to colleagues at Daystar University, where she is studying communication.

As a true go-getter, Emmah is known to walk around with copies of her Curriculum Vitae. One time, when she was in a bus heading to town, she noticed a queue at the Junction Mall. Following her instincts, she got out of the bus; asked around and was told that there was an interview going on at the Artcaffe. She immediately got a job as a waitress.

Because she was still in school, she registered for night classes. She used the salary she got from her new job to expand her business.

Like most entrepreneurs, she thought ahead. The money she got would enable her invest in fabrics. Emmah asked her mum for her old sewing machine and with her previous efforts, she was half way to realising her dream. The only thing she was left to do was to learn how to stitch. In high school, she had majored in the arts and hence had no practical sewing skills.

“As a dedicated learner, I would go to my tailor’s place of work in Kawangware every single day, sit with him the entire day so that he could teach me how to stitch,” she said with such fire in her eyes. YouTube was also part of her learning because she would watch DIY videos online.

With her new set of skills, she got to work. Emmah would make her own outfits and wear them to occasions such as church functions and weddings. Literally, she became a walking advertisement. With time, Emmah’s clothes business expanded beyond Kenya’s shores to the United States and Brazil thanks to networking with a couple of her foreign friends. Her pastor also helped her out along the way.

Her business helped her pay university fees for herself and her sister as well as take care of various domestic needs. She was getting her way out of the reliance lane and she vowed not to ask her parents for even a single cent.

There have been some challenges along the way such as customers not paying for products bought on credit, people complaining about her products’ price tag as well as pressure to meet deadlines with no express charges. “Some customers always want unique products but get heavy-hearted when it comes to paying the price!” she exclaimed.

Emmah’s uniquely designed outfits vary from a price tag of Ksh1,500 to Ksh6,000. Currently, she works from home but has plans to move to an office space in order to expand her business. By doing so, she will also have to hire personnel to increase on her productivity numbers. “At the moment, I am learning embroidery because I want to make modern outfits with an African feel,” she added.

With the interview almost over, she headed out to the kitchen to serve us some food. “By the way, I am a food fanatic. I love to cook and bake. I used to sell my pastries a while back. I told you I have the spirit of a hustler,” she happily stated. What can’t this lady do? When I asked her what advice she can give to people who want to follow her footsteps, Emmah said that one has to be patient, have the drive and the hustle power. In terms of finances, she stated that one should plan for the money they don’t have; think of what to do with the money before it comes.

What most successful business people start with is the plan, and then the money comes after. Emmah plans to start a fashion magazine company in future. She told this writer that she has so many plans ahead of her. “I am not fit for the office job. As I graduate next year, I want to be my own boss and run things my way. Watch out for me”, she stated. There is nothing as powerful as a person knowing what they are doing.

You can reach her on Facebook at Emmah Amoni Wambugu.