Charles Kyeti founded the compnay while studying at the university. Photo / Wesley Ken

At only 28, Charles Kyeti is the founder and CEO of A+ Interiors located at South B Estate, Nairobi. The firm offers interior design and decoration services for residential and commercial houses.

The company was founded at ADD, a classroom at the University of Nairobi’s main campus. “We were just two,” says Mr Kyeti. “But eight months down the line we are a team of eight: an accountant, a lawyer, interns and two other permanent employees.”

Initially, he partnered with another interior design company but split after a short while to start A+. “After the split, it was just me, my skills and my laptop” he says.


A+ serves offices, residential buildings, retail spaces like supermarkets and clubs among others.  Currently, the company is working for Octagon Pensions Ltd, and Mr Kyeti reveals that they are also doing some work for AIC Kijabe and a project called Fire-site, run by a communication firm in Kiambu.

But there is to more to come, he says. “Yes we are a design firm but we have also incorporated construction through A+ Construction, and early this year we started our first built project, Octagon Pensions in Westlands.

So what inspired this business idea? “Our interest and love for drawing. When we were in campus we realised we could make a living from what we enjoyed doing, which is drawing.”

He says he honed his design skills during his first employment. “I worked for Design Forty, and since then I have been into a number of creativity endeavours.”

On the challenges, he says A+ has not faced any major one so far, but is prepared for anything. He credits this smooth operation to lessons he learnt from his past mistakes.

So how does A+ stand out from other competing interior design companies? “Creativity, and our ability to deliver and a turnaround job within the shortest time possible Mr Kyeti says. “We are a young team and can work any time of the day. We don’t have backlog.”

To venture and succeed into business, an entrepreneurial spirit is very critical, he advises, adding that you need learn other skills like accounting and sometimes source expert knowledge or temporarily hire some.

Their principles of doing things: “Be good to people, show how you are giving them value.” Mr Kyeti says he learnt this from Dale Carnegie’s book, ‘How to win friends and influence people’.

At the moment he is reading Abraham Lincoln’s ‘Team of Rivals’. He says the book is an inspiration, and talks about it enthusiastically.


Currently, Mr Kyeti is the organising secretary of Interior Designers Association of Kenyan (IDAK). The association has 300 registered members across the country and seeks to regulate and control business within the industry.

His parting shot: “Do what you love.” 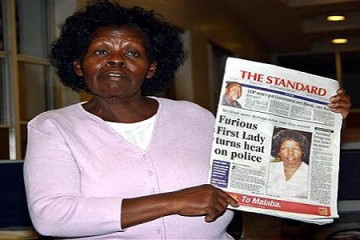