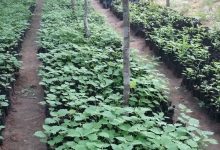 Planting of new tropical forests will bring back normal rains.

News of the continuing drought in Kenya caught the attention of the global business community last week, with speculation that the recent poor short rains would have a negative effect on coffee bean yields and their prices.

It seems Kenya has no option but to face increasing environmental challenges. Some of them include water shortages, soil erosion, water pollution, desertification and their effects are rising steadily. Reforestation is frequently proposed as a solution for many of these issues.

A recent report by Afr100 stated that 65% of Africa’s land mass has been degraded in some way. Tracey West, Chief Executive of Word Forest Organization says. “If you plant trees, the benefits are endless,” says the sustainable living author, whose first batch of many trees she’s responsible for, were planted in deforested land of Bore in Mombasa.

Tracey says with help of her husband, Simon and a handful of trustees, she formed The Word Forest Organisation, a U- based NGO with a mission to plant trees on degraded land, build classrooms in impoverished communities, and raise environmental and forestry awareness throughout the region.

The positive impact of the work they have done include improved physical conditions for learning for students and teachers; biodiversity is beginning to flourish as safe habitats return and the forests attract wild cats, weaver birds and many more.

Lessons on sustainability and forestry management have given rise to Wildlife Club to care for and study the forest and its creatures. She adds that communities now understand the
environmental importance of reforestation and want to plant more trees. “We have a global forestry expert in our
team of trustees called Ru Hartwell who has worked with many
communities in the Coastal region for over a decade. He has planted hundreds of thousands of trees all over the world and some years back, he realised there was a huge additional environmental benefit to planting them near the
equator in Kenya,” she explains.

Tracey says planting of new tropical forests will bring back normal rains. In a handful of years, considerable planting of new trees could make Kenya far more resilient as it struggles to cope with its increasingly challenging climate.

The Word Forest Organisation has a network of schools and communities throughout the region who are ready, willing and able to plant new forests and quickly. Their membership scheme is growing steadily but Tracey is keen to up the pace by offering attractive corporate partnerships too.

The report also states that this particular subsector – which identifies measurable environmental benefits in addition to financial returns – accounted for $2 billion of investments in 2015 an increase from $0.2 billion between 2004 and 2008 and almost doubling from $1.1 billion in 2014.

“We want to work with sponsors who share our passions and are content in the knowledge that their investments are protecting biodiversity, improving food and water security, helping to combat the horrors of desertification and helping inspire a generation of Kenyan youngsters,” says Helen Roberts, the Education Trustee.

A CDP report also indicates that there could be huge impacts still to be seen across agricultural sectors as a result of deforestation. However, the organization believes that a lot more Kenyans would find planting trees a hobby, if not a responsibility. “We are ready to reforest and repurpose vast swathes of degraded land in Kenya and this action is critical if the world hopes to meet the targets laid out in the Paris Agreement,” adds Simon West, the Organization’s Managing Director.

The writer, a correspondent with Business Today, is a football commentator and finds the money factor in the game. Email him at: [email protected]