M-Pesa, the world’s largest mobile money network, has enabled millions of Africans to gain access to safe and secure banking solutions. The idea has become a pioneering innovation for the continent, and is now used as a model for similar systems around the world.

Smartphone payments are gaining ground in the US, but mobile money is old news in Kenya. The majority of the East African country’s population is subscribed to a mobile payment service, and the most popular choice is M-Pesa, which celebrates its 10th anniversary in March 2017. M-Pesa  (pesa means money in Swahili) has made a dramatic impact over this time.

The system was launched by Vodafone’s Safaricom mobile operator in 2007 as a simple method of texting small payments between users. Today there are 30 million users in 10 countries and a range of services including international transfers, loans, and health provision. The system processed around 6 billion transactions in 2016 at a peak rate of 529 per second.

M-Pesa is also lauded for its social value; offering opportunities for small businesses, and playing a significant role in reducing poverty.

There have been bumps in the road – the service was withdrawn from South Africa after poor performance – but M-Pesa’s first decade has been a success story. 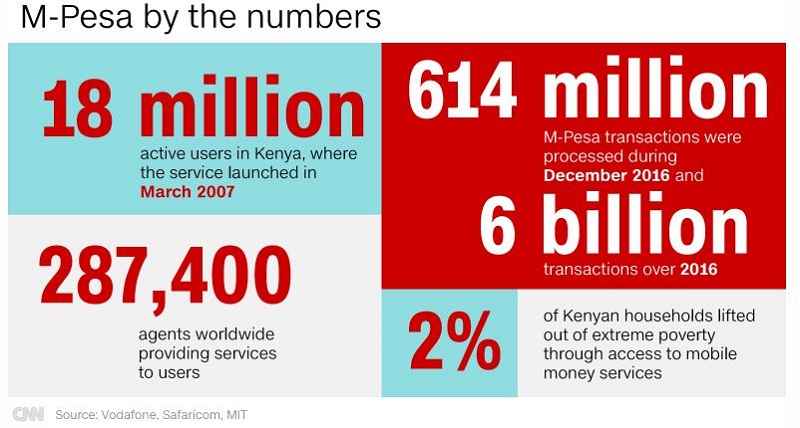 The next decade will bring new challenges for the mobile payment system. Safaricom CEO Bob Collymore says it a priority to refine the user experience and offer new services. “One of the big problems has been the relative clumsiness of using M-Pesa,” he told CNN.

New streamlined solutions include a debit card that will allow users to tap and pay, and a new mobile app. The service will face stronger competition in the coming years. The Kenya Bankers Association – representing 46 banks –  is introducing its own mobile payment platform that will allow convenient transfers between accounts at different banks, and the group hopes this will eat into M-Pesa’s market share. “Given the economics of the product, I think you’ll find customers moving over and preferring to use our product,” says Habil Olaka, CEO of the Kenya Banker’s Association.

Look after the pennies

The Safaricom CEO says he welcomes the banks’ intervention as he believes it will drive innovation and benefit the consumer. “We always used to say that cash is the enemy,” says Collymore. “Holding cash doesn’t make sense. As soon as you put it in the mattress, it loses value.” “We are not attacking the banks; we’re working with the banks…If other people are finding solutions for problems, then that’s also cool.” 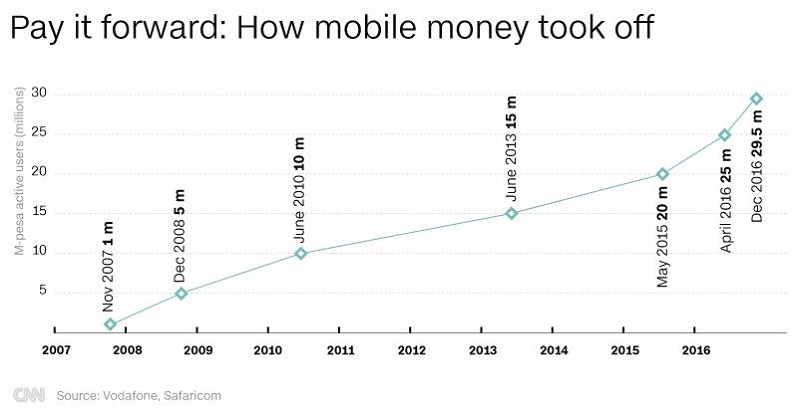 But financial analyst Aly-Khan Satchu of Rich Management believes that competitors will struggle to displace a service that has put down deep roots. “Are the (banks) going to be able to dislodge M-Pesa? I’m not so sure. It’s ubiquitous, it’s everywhere,” he says. “I think they’re going to struggle.”

Perhaps in recognition of this challenge, Olaka says the Bankers’ Association will be targeting payments that exceed M-Pesa’s maximum transaction of 70,000 Kenyan Shillings ($675).

Collymore is happy to maintain focus on the other end of the market. Micro-payments drove M-Pesa to a position of dominance and the CEO has faith that the same model can sustain success into a second decade.

“We target the one shilling,” he says. “The banking sector across the world has always ignored the so-called base of the pyramid. We haven’t because we understand that the base of the pyramid needs to be served and there’s also commercial viability in doing that.”

The ingeniously simple method of money transfers made via cellphone messaging (SMS) has connected many to formal banking systems and enabled opportunities for small business and informal commerce, as well as played a part in helping to eradicate poverty, particularly in rural areas. 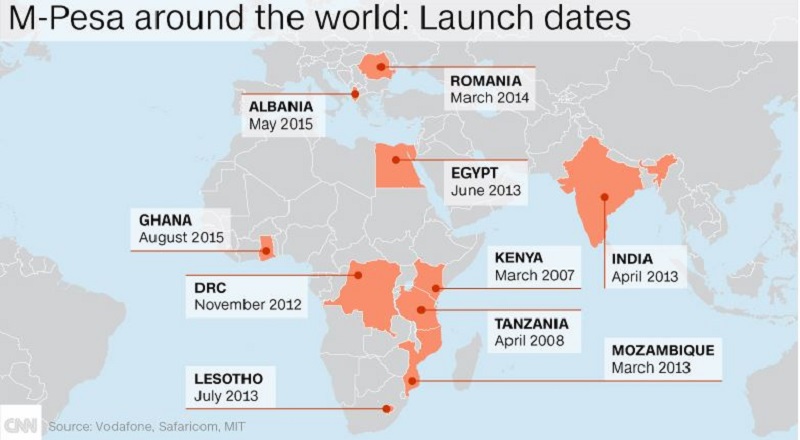 The adoption and rise in popularity of mobile money networks in Africa has been steady. M-Pesa and its various competitor networks now not only include money transfers and other standard banking procedures, but also healthcare provision, access to international money markets and long-term lending.

M-Pesa was introduced in South Africa in 2010, gaining more than a million users. It aimed to conquer a market of 13 million economically active people who did not use bank accounts. However, because of stricter banking regulations in South Africa, as well as the development of more tech-savvy banking products, the system found little foothold in the country.