Safaricom House in Westlands. You can now cash in your bonga points for essential goods [Photo/ Kenya Insights]

For close to five months, the new Safaricom CEO, Peter Ndegwa, will not take up his role, which has been highly publicized.

Ndegwa who has a highly successful career is taking the mantle from the late Bob Collymore, albeit indirectly, since Michael Joseph is in the acting role since July 1.

The new appointee has to wait until April 1, 2020 to formally take up the role which has been keenly watched by Kenyans. Sources say he will, in the meantime, be serving notice at Diageo, his current employer.

A House at War with Itself

For the telco giant that was started in an apartment at Norfolk towers in the year 2000, it now seems like Safaricom is a house at war with itself.

Less than 24 hours after unveiling their new strategy, it seems like the happenings behind closed doors could be further from being simple, transparent or honest.

It smells like some sort of low-profile boardroom coup on the status quo.

In a pointer that Joseph was in it for the long-haul, the company press kit referred to him not as the ‘acting’ CEO but just as the CEO.

Further, it seems like Joseph was getting too comfortable with the company, promising that Kenyans could ‘talk to him’ by dialling a certain number.

However, the call was an audio recording unlike what would have been the expected response of one-on-one calls with Joseph.

Joseph thanks Safaricom customers in the audio for being their customer and for continued support.

For someone holding the CEO position temporarily, this audio recording could point to Joseph not being ready to leave the position just yet. He sounded like the champion of the new Safaricom strategy.

With the announcement of the new CEO coming so soon after promising to talk to their Safaricom customers, this may have come as a surprise to the man who wonders if he could do the same things he did at the telco to the struggling national carrier, Kenya Airways.

Questions abound as to why the new CEO was not unveiled while launching the new strategy. Why was Joseph being referred to as the CEO very well knowing that his replacement was ready.

And as if pulling the carpet from under Joseph’s feet, why was Ndegwa’s appointment announced out of synchrony with the new strategy?

Seemingly, the government has finally had its way by having a Kenyan at the helm of the country’s most enviable company.

Whichever way we look at these scenarios, one holds that for Vodafone, the centre could no longer hold.

An even bigger question is whether a Kenyan can be trusted to propel Safaricom into greater success than have the two Vodafone boys.

Kenyans who Have Steered Companies to Greatness

For the longest time, the Kenya Wildlife Service (KWS) struggled with loss-making until Julius Kipng’etich was appointed its director. Interestingly, he and Ndegwa are Starehe Boys Centre alumni.

Kipng’etich took over KWS in 2005 when it almost a billion shillings in the red.

From a Ksh800 million graft-ridden entity to a Sh4.6 billion corporation, the technocrat left the entity just six years later with a complete devolved management and a strategic plan.

Richard Leakey was indicted by a 1994 Auditor General’s Report where he was accused of running the organisation as his personal business.

Leakey’s successor, Evans Mukolwe, was no better and he was suspended for flagrant abuse of privilege.

Another success story is that of Martin Luke Oduor-Otieno who led Kenya’s biggest bank by assets KCB into the safe zone after years of poor performance.

Oduor-Otieno was among those appointed by former President Daniel Moi in 1999 to help turn the economy around.

Despite his retirement, Oduor-Otieno remains one of the most sought after executives to help companies grow their brands. He is earning tens of millions per year for just sitting on boards.

Wilfred Kiboro is another Kenyan who shows that Kenyans have what it takes to excel in senior corporate positions.

The 75 year-0ld Kiboro has been the Group CEO of the Nation Media Group and he also chairs other companies in Kenya.

With these successful cases, ndegwa has his assignment ready and it is up to him to prove that indeed he can do it locally as he has on the international stage.

For a company like Safaricom, letting go of control is a difficult thing to do. For shareholders like Vodafone, it has been a grip of steel on Safaricom to ensure their interests are not disadvantaged.

Vodafone’s control was seen with Joseph’s re-appointment while the Kenya government was seemingly lobbying to have a Kenyan replace Collymore.

Evidently, Vodafone was for the status quo at Safaricom not ready to relinquish the position despite having been at the helm for 19 years.

The boardroom intrigues started way before Collymore’s reign at the telco came to an end. At the end of his tenure, Collymore’s term was extended by a year as a ‘suitable’ replacement was sought.

In mid-July this year, the government expressed interest in the position being filled by a Kenyan just weeks after Collymore died.

Later that month, ICT CS Joe Mucheru said that even though the government is a major shareholder with 35% stake in the leading mobile services operator, it could not dictate appointments.

Mucheru said that the Safaricom board was tasked with that responsibility.

With the retreat from influencing the next Safaricom CEO choice, the focus was now shifted to the board. The men and women who would pick Collymore’s successor had their job cut out. Or was it so?

Joseph who is Vodafone’s advisor doubles up as a Safaricom board member and the quick turn of events could be bringing to light what could have transpired in choosing a substantive CEO for Safaricom.

A History of Failures, Disappointments

With Ndegwa’s chequered career, Kenyans are watching hoping that he will not go the way of the infamous brilliant minds that ran down Kenyan companies.

It is understandable that Kenyans are apathetic towards a Kenyan leading such a company due to what they have witnessed.

Kleptomaniacs have abused the country’s economy for decades under the watchful eyes of their political godfathers in Kenya’s successive governments.

Among the casualties of the thieves include Mumias Sugar whose success story in Africa resonated since 1976 under the management of Booker Tate.

Panpaper Mills, Uchumi Supermarket and other companies have collapsed due to poor management and theft.

And it seems that the Uhuru Kenyatta government has gone far beyond what Kenyans have been through.

With bated breath, Kenyans will have to wait to see how far Safaricom will if go starting with its third decade with a Kenyan at the helm. 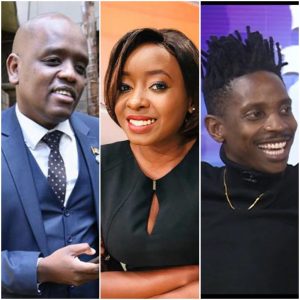 Jackie Maribe’s World: Guess Who’s the New Boyfriend
Jackie Maribe has a huge following in both her public…