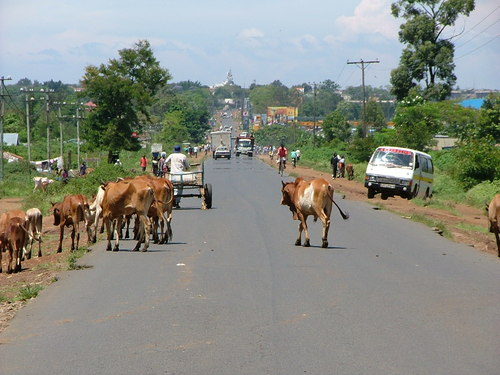 [dropcap]I[/dropcap]t is not every day that you walk into the Central Business District (CBD) of a town and find it inhabited by livestock, especially cows. This is because many county authorities have by-laws that govern movement of livestock in urban areas.

But Narok is not your normal town.  Scenes of cows roaming the streets greet visitors to Narok town. It becomes even more interesting when these cows spend most part of the day lying on the main streets and highways of the town chewing the cud, blocking and interfering with smooth traffic flow.

Many man hours are lost as people are held up in a jam for hours as the livestock cross or just take a rest on the roads.

Narok County laws are silent on movement livestock in the town centre, possibly because free livestock movement is part of the culture of the local Maasai people. A county government official who talked to us on condition of anonymity confirms that such a by-law would not go down well with the locals.

But Narok North OCPD Joseph Kisombe, whose area of jurisdiction includes the CBD, says unless the county government comes up with by-laws to govern such movement, it’s hard for them to arrest the herders. “Our hands are tied in respect to the law,” he says.

SEE ALSO: INSIDE THE WORLD OF NIGHT RUNNERS

The OCPD noted that accidents involving animals mostly occur around Suswa area during the dry seasons when animals move in search of pasture. In the past, there have been many accidents as motorists ram into the animals lying on the roads, sometimes at night. Many unsuspecting motorists have also ploughed into livestock crisscrossing the roads killing some in the process and inviting massive loses.

In May this year, a herder was injured and 14 heads of cattle killed when a Matatu rammed into them at Tegero Bridge along the Narok-Bomet highway. In April, traffic was paralyzed for a good part of the day at Nairegia Enkare area along Narok-Maai Mahiu Highway, after residents barricaded the busy highway protesting the killing of 103 sheep by a speeding Lorry. Such scenes are common.

The animals are a nightmare to motorists, motor-cycle riders and even pedestrians who jostle for space on the road with the animals.

But the root of all this lies in the culture of the Maasai people who practice pastoralism, where animals are allowed to move from one place to another in search of pasture.  “These cows are just a time bomb waiting to explode,” exclaims Ezekiel Mwangi, a boda boda rider. He says sometimes the animals just move on their own without herders.

Another motor-cycle rider, Anthony Githua says the community is too connected to their animals due to their culture and are very sensitive to anything that happens to their animals. They say something should be done about the animals for their own safety and that of all road users.

They are urging the County government to come up with by-laws that will help put some order in the situation.

Pastor Evans Omondi, a taxi driver in Narok town, notes that the town is already congested and removing the animals will help reduce the traffic snarl ups in the town.

Under the Kenyan Traffic Act, it is a crime punishable by law. Section 88 of the traffic Act states that ‘Any person found driving or conducting any cattle, dog or other animal who, on any road, fails to exercise reasonable care to keep it or them under proper control, or allows such cattle, dog or animal to become a danger or annoyance to the public, shall be guilty of an offence and liable to a fine not exceeding Sh10, 000.”

Many see this fine as too lenient to be a deterrent, even if the offender were to be taken to court. “The herders too should adhere to highway codes because when animals just cross the road at any point, they endanger the lives of motorists and their passengers,” Mr Kisombe, the local police boss says.

NEXT: SHOCKING MILLIONS BODA BODA MAKE IN A DAY