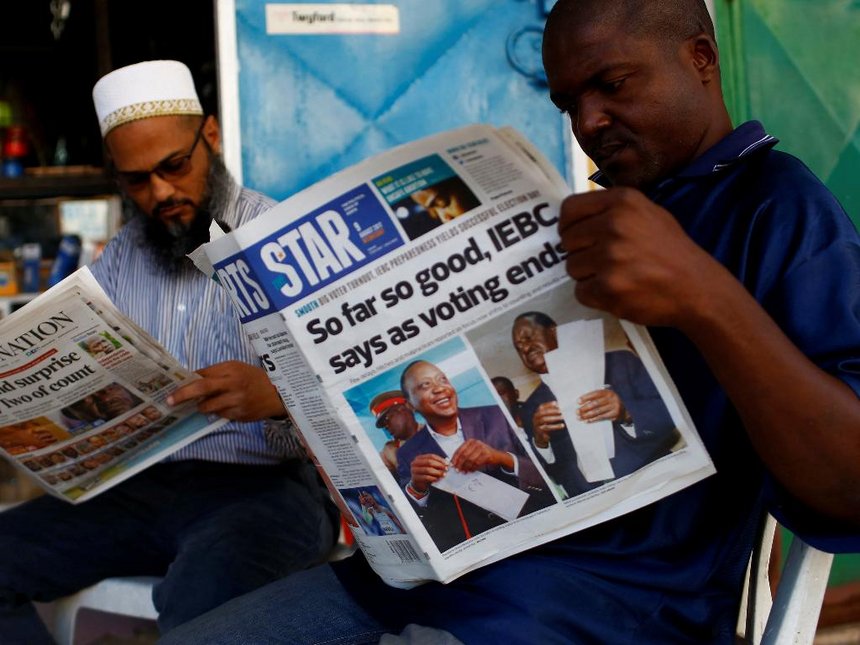 In the last few days, the mass media in Kenya has been under severe attack by audiences and journalists. This specifically concerns how we covered the just-concluded General Election and the events that followed.

There are those who feel we did a good job, while others feel we let the country down by not telling the “truth”. We have been told the international media did a “better job”. This view is perfectly in order. It fits within the media gratification theory that says audiences look for content that conforms to their own social and political outlook as well as support their status in their own social grouping. That is how we behave as audiences – we want media content to affirm what we believe is “true” – even if it is not factually and logically true.

On the night of Sunday 13th August, it was alleged that people in Mathare, Ngomongo area and Kibera were under attack by the Mungiki. I woke up at 3am to find my phone blinking non-stop. The WhatsApp groups I belong to had messages of people who said they knew people in these areas and they were in danger. I went to Facebook and there were 48,000 searches about Mathare! In the morning, I was eager to see evidence – photos, reports and videos of the attacks.

The media was accused of not reporting an “ongoing genocide” against people of a particular tribe. The interwebs were active with false reports and photos. I even saw photos from the 2007 post-election violence circulating. That weekend, sections of the media had covered the incidents in Mathare, Kawangware and Kibera. We spoke to victims and the police. The audience felt we did not tell the “truth”.

Sadly, we are discussing the mass media as if it is an institution that is part of society instead of an industry. I want to draw the line here. Although the media has evolved in response to the social and cultural needs of individuals and societies, always remember that the media is largely run as a business.

And the media is not just any other business; its activities are inextricably both political and economic as well as very dependent on continually changing technology. We must also remember that the ‘neutrality’ of media does not exist because it is linked to the economic, social and political structures in society.

Related: Kenya’s elections show how the media has sold its soul

It is also important to understand the question of media ownership and how the powers of ownership are exercised. The belief that ownership ultimately determines the nature of media is a Marxist theory and a common sense truism presented in Herbert Atschull’s (1984) ‘second law of journalism’ which says that the contents of the media always reflect the interest of those who finance them. However, Atschull’s opinion can be debated.

It is public knowledge who owns the Standard Group, Nation Media Group, Royal Media Services, Radio Africa Group, MediaMax, Capital FM etc. Powers of ownership can be exercised in different ways. There are media owners who personally pay for the privilege of influencing content. Majority of these owners just want profit. Most of the media businesses are financed from different sources – private investors, advertisers, consumers, governments etc. It therefore follows that the line of influence from ownership is often indirect and complex – and it is rarely the only line of influence.

Liberal theory assumes that ownership can be effectively separated from control of editorial decisions. Decisions about resources, business strategy etc, are done by the owners or boards, while Editors and other decision-makers are allowed to make professional decisions about content to publish or air.

Editors are known to engage in heated discussion about stories and certain decisions that may look unpopular.

It is assumed these media houses are run by professional journalists who act as gatekeepers. The decisions they make are not as simplistic as those on the “outside” think. By the time a Managing Editor of a television station decides to give live coverage to an opposition political party or publish reports of an attack on the front page of a newspaper or website, the decision is based on various factors. Editors are known to engage in heated discussion about stories and certain decisions that may look unpopular. We must also remember that Editors too may have a bias and their own version of “truth”.

Most of media around the world fall under commercial companies, private non-profit bodies and public sector. However, there are further sub-divisions: a company can be public or privately owned, a large media chain or conglomerate or a small independent. It may also matter whether or not a media enterprise is owned by a so-called ‘media tycoon’ or ‘mogul’ typified as wanting to make personal interest in editorial policy. Non-profit bodies can be neutral trusts, designed to safeguard independence of operations (as with the Guardian newspaper), or bodies with a special cultural or social tasks, such as political parties, churches and so on.

And lest we forget, the media is powerful in shaping opinions. I will briefly take you back to the development of the mass media in the 19th century. The press, specifically the newspaper, was the first medium that reached the mass audience through an intricate distribution network. Newspapers reflected the changing character of society.

Daily and evening papers played various roles: presented news, entertained, and was a platform for advertisers. Through the selection of stories and presentation of news, they created intellectual and ideological frameworks within which readers were able to come to terms with their local, national and international environment.

As we mull about the future of Kenya post the 2017 election, we must look at the media differently. I hate to disappoint, but media is not as “objective” as we want them to be. Heck, there is nothing like objectivity. All human beings have a form of bias!

Carole Kimutai is the digital managing editor at Standard Group. This article was first published in the The Nairobian Newspaper.