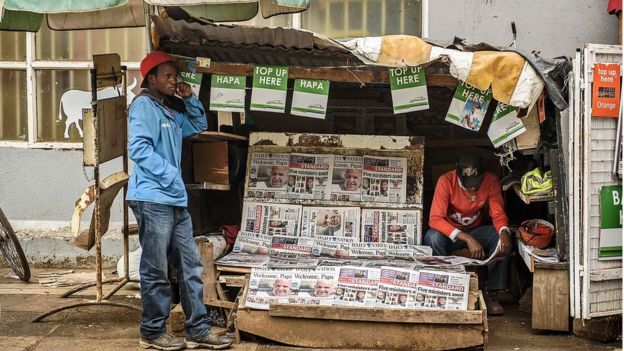 In Francis Imbuga’s 1976 play, “Betrayal in the City,” the Kenyan playwright and literature scholar describes life in the fictitious, dystopian, post-colonial state of Kafira. One of the characters, a university don, is jailed for speaking his mind: “We have k****d our past and are busy k*****g our future.”

As I write this, Kenya is busy k*****g its future. Once again, a disputed presidential election has put the country on edge. After a week of building tension and deserted streets and people stocking up on food, and water, protests erupted in parts of Nairobi, sparked by the declaration of Uhuru Kenyatta as the winner. G******s and police choppers were heard in Kibera, one of the capital’s largest slums and a bastion of support for his bitter rival, Raila Odinga, who claimed the election was stolen.

There was tension as the announcement of final results was delayed and small protests broke out in several parts of the capital and in other urban centres, many of which led to d****y clashes with police.

However, you wouldn’t know this from watching most Kenyan media, considered by some as one of the most vibrant on the continent. While covering in detail the complaints of election h*****g and rigging raised by the main opposition presidential candidate, Raila Odinga, as well as the responses from the Independent Electoral and Boundaries Commission (IEBC), the media, with the sole exception of the Star, was nonetheless determined to avoid any mention of the tension and the protests and instead chose to regale the country with colourful stories of the “Githeri Man,” who became Kenya’s new Internet sensation.

Further, on social media, the usually irrepressible collective that calls itself Kenyans On Twitter (#KOT) was similarly subdued. Gangs of Twitter bots trolled the online streets looking for any reports of protests on local or international media, branding them either “fake news” or evidence of a nefarious plot by foreign correspondents to incite v******e for the sake of boosting their career prospects or securing book deals. There were even reports of police preventing journalists from covering the demonstrations, confiscating equipment and deleting footage, and even threatening to shoot them.

Much of this is reminiscent of what happened in the 2013 election. Four years ago, as the country again h**g on tenterhooks with politicians bickering over another presidential election, I wrote of a compact that had developed between the media and the public: “Kenya would have a credible election, no matter what.” Back then, it was thought that the way to avoid the sort of v******e that had nearly torn the country apart in 2007, on the back of yet another disputed presidential election (hope you are noticing a trend here), was to not ask uncomfortable questions about it.

Today, the reasons for silence are considerably more sinister. In the run-up to the election, there was great public resistance to “preaching peace” as a means of preempting v*****t protests in the event that the election was disputed. So out went “peace journalism.” But in place of a compact with the people based on the mutual fear of anarchy, the media appears to have made a deal with the government based on a mutual interest in plundering the public.

By law, the government is forbidden from advertising its achievements in any media during the election period. However, this did not stop Kenyan media houses from pocketing millions in the weeks before the election for allegedly broadcasting i*****l advertisements from the President’s Delivery Unit, some of which even bore the tagline “Jubilee Delivers” and “Uhuru 2017.”

In return, it seems the media has sold its soul. The first sign came very soon after the closing of the polls, when one TV channel, KTN News, gave the results of what it called an exit poll. The curious thing about that poll was it does not seem to have asked the voters how they voted, which one would assume is the point of an exit poll.

But worse was to come. Going to bed with government seems to have led to a wholesale abandonment of the media’s journalistic duty to independently verify the results of the election announced by the IEBC. A C*************l decision in June had made it clear that results of the presidential election declared at polling stations and constituency tallying centers were final and could not be altered by IEBC mandarins at the national tallying center in Nairobi.

That opened the door for the media to run independent tallies and, despite largely empty government threats of having their licenses canceled, even call the election. And indeed, many already had this capacity. In January, Samuel Macharia, owner of Kenya’s largest TV and radio network, Royal Media Services, told the Senate that his network had independently tracked records at every presidential election since 1992.

Yet, it appears that this did not happen. The press was crowded at the national tallying center at the Bomas of Kenya in Nairobi, hanging on every word that the IEBC issued. It was content to run its unofficial tallies rather than get the official counts and tallies from the lower levels.

And worst of all, as the politicians and IEBC officials haggled in Nairobi over which numbers are correct, the media was happy to play along rather than spare us the drama by simply heading down to the 40,000 polling stations where the official and final results were posted outside for all to see.

Rather than preaching peace, the Kenyan media chose to earn its 30 pieces of silver by ignoring or editing out citizen frustrations in order to maintain a facade of normality. But there’s nothing normal about this silencing, the de-legitimisation of those who feel the need to express their discontent through peaceful marches, or by ignoring those who may have d**d at the hands of the police.

Imbuga’s play has an ignominious character, Mulili, who uses his closeness to the supreme leader to secure c*****t advantages and to sell out his countrymen. At the end of the play, Mulili’s duplicity is laid bare and he is executed, signifying the passing of the oppressive order and the birth of new hope. Similarly, Kenya’s media needs to get out of Kenyans’ way so that they can get down to the business of saving their future.