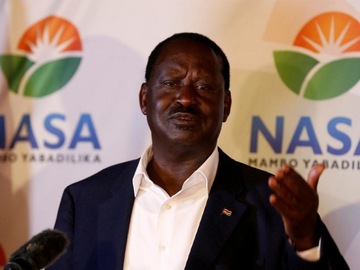 National Super Alliance (Nasa) presidential candidate Raila Odinga has put off his announcement on the way forward following what he claims was a stolen victory in the August 8 General Election.

The Opposition formation’s head of presidential campaign Musalia Mudavadi said the announcement will be made after ongoing consultations.

“Owing to the the urgency, complexity and delicate nature of matters NASA Summit is handling, our consultations are on-going and progressing well,” said Mudavadi.

This came as NASA protested failure by the Independent Electoral and Boundaries Commission (IEBC) to avail Forms 34B from the constituencies with Chief Executive Ezra Chiloba saying they will be provided as soon as possible.

NASA says its agents have been following up with the electoral agency since Saturday for a release of the same to date without success.

“The said forms cannot be traced or accessed on the Commission’s online portal. We call upon the Commission to release and share all the constituency Forms 34Bs to party agents. The failure to so share can only lead to a conclusion that the forms do not exist and the Commission is busy generating fake forms to justify its declaration of results as made on 11th August 2017,” the Opposition coalition said in a statement.The IEBC declared President Uhuru Kenyatta the winner of the closely fought contest on Friday night with 8,203,290 votes (54.27 percent) against Raila Odinga’s 6,762,224 votes (44.74 percent).

NASA claims an IEBC insider provided them with results that put Raila in the lead.

Raila on Sunday called for a job boycott while telling his supporters he will give them guidance on the way forward Tuesday.

There are fears that NASA could resort to street protests after declaring it will not go to the Supreme Court to challenge the poll’s outcome, as urged by various actors, including the international community.