Health CS Mutahi Kagwe flanked by other CS when he announced that Kenya had confirmed the first coronavirus case. Kagwe says that God in his wisdom has decided to place the youth at this particular time, so that they can take responsibility of this disease. [Photo/MoH]

The Kenyan youth is one of the most downtrodden in any democratic nation in the world.

Almost six decades since the country gained independence from the colonialist, ukoloni mamboleo remains and the youth bear the brunt of it. Interestingly in politics, most of those who fall in the category above the youth bracket which is 35 years find government jobs easily in Kenya than those who could help move the country forward.

In fact, the president has been on record saying that the Kenya youth cannot be trusted with government jobs because they are corrupt.

In December 2018, Uhuru Kenyatta defended the decision to appoint former Vice President Moody Awori to the Sports, Culture and Social Development Fund Board, saying he had lost trust in the young generation.

“I saw that I was being criticized yesterday for appointing a 91-year-old to look after the youth’s sports fund…lakini jameni you put yourself in my shoes. Ukiona vile pesa inaibiwa and this is money that we went and passed the other day to support health programmes… halafu useme tupatie kijana, mimi afadhali bana nikae na huyo mzee achunge hiyo pesa na itumike vile inatakikana! Watu wawachane na mimi bana sitaki mambo mingi…” he said.

But we are living in interesting times.

Ali Gire, the gentleman who is more patritic than many holding government jobs today has been demonised and even branded a criminal because he chose to fight ineptness by those mandated to run this country.

Gire became a target after recording and sharing a video of a Chinese plane landing at the Jomo Kenyatta International Airport (JKIA) when China was still in the heat of the covid-19 coronavirus.

The Kenya Airways employee was suspended for the recording where 239 China nationals aboard a China Southern Airline were allowed into the country and asked to ‘self-quarantine’.

It is indeed interesting times that God has just realised there are youth in this country who can be used during the outbreak of the deadly covid-19 coronavirus. What abuse and twisted view intended to misuse the very population that has been exploited for selfish political gain for decades.

“There is a generation that fought for independence and did its part, there are those who fought for the economy and the constitution. I appeal to you, it is now your turn as others have done, to protect this country,” added Kagwe.

It is almost laughable that such an inane statement can be coming from a government that has made it its sole mandate to frustrate the youth left right and centre. There are no jobs with most of these young men and women confined to the corners of the economy where they are expedient for the political elite.

“If you don’t, you will suffer the most. There will be no jobs and a collapsed economy. It is you who will bury us in large numbers. However, the path ahead is clear, you have to be part of the solution,” the CS added.

Ironically, most of the youths he is imploring do not have passports and if they do, they have not been allowed to use them due to the tough economic times. The passports are just a means to escaping the country that has betrayed them and killed their hopes by stealing their future.

The CS proposes that the youth can organize themselves into groups and assist the security agencies to ensure that people maintain social distance.

As it has been and continues to be, the youth are only good for the menial tasks and not holding public offices. Kagwe is very well in order following the script that has been entrenched in a country that is bursting on the seams with youth who only need an enabling environment to make great things happen.

Also read: Too Late or Just in Time: Government’s Handling of Coronavirus in Kenya

And now to the big issue.

The youth in Kenya did not let in the coronavirus but those who are responsible for it are still enjoying all the trappings of power.

In addition, the youth may not have a grip of the complexities in running a country and so they do not deserve what they have been clamouring for. But when it comes to disasters, these same people who are unacceptable in public office qualify to be in the frontline because they are the expendables.

In Kagwe’s words, the youth will bury these politicians in large numbers.

Covid-19 coronavirus is the equaliser now that all the politicians have scampered and can only follow what is happening from the safety of their homes- albeit at the expense of the taxpayer. Interestingly, they are not falling sick requiring medical attention abroad and if they are, they are doing well keeping this under wraps. 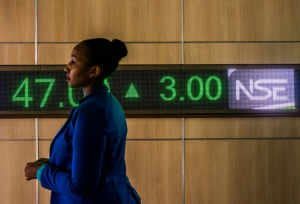 NSE Claws Back After Panic Exit of Foreign Investors
A market analysis for Quarter shows foreigners pulled out Ksh9.1…