There has been tension between the two camps, with the newcomers seen as the elevated ‘dream team’.

When Hussein Mohammed signed off Citizen TV at the end of October, it was cleverly designed to portray a mutual parting of ways, punctuated with hugs and pats on the backs.

Hussein, who displays a calm but firm personality, was even given a chance to say goodbye to his viewers on TV, something rare in media circles.

In fact, a cake party was thrown for him by his colleagues, moments after he did his last Newsnight show on Tuesday 30th October 2019, as some of his colleagues and bosses showered him with praises and well-wishes.

Revenge of the stars

But hidden behind the carnival and smiling faces were boiling emotions that had built up over many months to force out one of Kenya’s most respected TV anchors from the Citizen TV screen.

Turns out, there is simmering bad blood between the ‘old’ and ‘new’ teams of employees who work for Royal Media Services.

In new employees’ camp are journalists who joined Royal Media Services between March and July 2018, comprising Editorial Director Joe Ageyo (from KTN), Strategy Director Linus Kaikai (from NTV), Yvonne Okwara (news anchor, from KTN) as well as a host of other journalists including Jamila Mohammed, Pamela Asigi, Rashid Abdallah and Nimrod Taabu (all from NTV), among others.

The old camp has journalists who had been working for RMS before 2018. Prominent in this group are Jeff Koinange, Lillian Muli, Willis Raburu, Waihiga Mwaura, Francis Gachuri, and Hussein Mohammed (now gone).

Insiders say there has been tension between the two camps, with the newcomers seen as the elevated ‘dream team’ brought in to take RMS to the next level. Given this positioning, it is understood that they occasionally look down upon their colleagues.

Also, the newcomers came on board with inordinately higher salaries since they had been headhunted from competing broadcasters. This created an unequal salary scale at RMS that left a bad taste in the mouths of the old camp who believe they do more than the dream team guys.

Dream team members are said to earn up to double what their peers at RMS get, creating bad blood between them and ruining the working chemistry needed for a media house to operate seamlessly.

The ego battles and star fights culminated in a cold war of sorts that left the old team holding the short end of the stick.

When they arrived on the scene, Hussein Mohammed became one of victims of the new system with clear tension between him and the new bosses. “His body language had been unmistakable,” said an RMS insider.

On his last day, Hussein threw hints on who were his friends and not-so-good colleagues at RMS that very few viewers emotional about his exit could barely notice. He acknowledged some and deliberately left out others, pointing to who could have made his life difficult at Citizen TV.

This is what Hussein said in his partying shot:

“It has been an amazing journey, 10 years and you the viewers have made it all worth it. You all have made it worth it, including my guests,” he said at the end of the bulletin.

And dropped the hints in this line: “I appreciate the support and guidance of RMS Chair S.K. Macharia and Vice-Chair Gathoni Macharia, the managing director Wachira Waruru, the management, the Lands Cabinet Secretary Farida Karoney who was our boss here a while back.”

Deliberately, he never mentioned his immediate bosses Joe Ageyo and Linus Kaikai. That statement was quite telling. Hussein chose to isolate his detractors on his last day which turned out to be one of his high moments.

The fallout was evident as he walked out of RMS. And things have not been the same again for Citizen TV.

Reports indicate features reporter Saida Swaleh is also leaving.  And so is Dorcas Wangira, the Citizen TV reporter who in April this year was named the winner of the 2019 Michael Elliott Award for Excellence in African Storytelling. 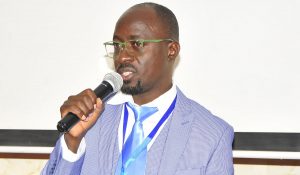