Quitting a job is a decision that should be heavily supported by a valid reason.

Most people quit their jobs because of low pay, poor working environment or even being overworked.

Things were different for the founder and CEO of Ambigen Group Sam Vidambu who quit a well-paying job because he felt he was not making an impact in the World.

The decision to quit his ‘perfect’ job led to the birth of Ambigen Limited, a company Vidambu says has impacted the lives of thousands of youths. The Ambigen boss was working as a Financial Manager earning 65,000 in a month.

The Ambigen boss had secured the job immediately after graduating with a Bachelor’s degree in Commerce at the Dedan Kimathi University. Very few graduates secure jobs immediately after campus and Vidambu made a heavy decision giving up the opportunity he had got.

“I was not really happy at my work even though I was making good money. Yes, I was getting my paycheck at the end of the month but I realized I was not really making an impact in the society,” Vidambu said in an exclusive interview with Business Today.

When starting Ambigen, Vidambu was looking to make a change in society to make life easier for the coming generation. The 25-year-old CEO is on a mission to make sure that no young individual goes through the life he did.

The social entrepreneur’s biggest mission is ending poverty in Kenya as he grew up in a family that was poverty-stricken and did not like the experience. It is the story of his life that motivates him to make life easier for the coming generation by eradicating unemployment and poverty.

“If we can help these young people develop ideas and grow their business, it will be making a step in ending poverty. The youths will also be kept busy hence reducing crime as well,” he explains.

In his quest to achieve the mission he set, Vidambu has talked to school students in Kenya and beyond. Quitting his job opened up an opportunity for him to become an international speaker as he has had talks in Uganda, Rwanda, Tanzania, and Nigeria.

At the high school level, Vidambu tells students about how to avoid venturing into drug abuse and focus on their studies. When talking to University students, he tells them what to expect in the job market and why they need to have money-making ideas while still in campus.

Vidambu conducts the mentorship programs through an organisation that is an affiliate of Ambigen Limited. Through Global Mentorship Network, Vidambu has mentored students from all over the countries sharing his story to help in motivating them.

According to the Ambigen founder, the company was not started to make money but rather to impact the community. He says the company still makes money but he does not focus on that mainly.

“It’s not about making money because the money will come later. Itis about solving societal problems like poverty and crime,” Vidambu explained his role as a social entrepreneur.

Quitting a job is a decision that many people are afraid of making but one that Sam Vidambu will forever hold close to his heart. 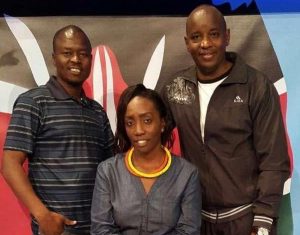