Presidents Uhuru Kenyatta (right) and Vladamir Putin exchange pleasantries during the first Russia-Africa Summit on October 23 in Sochi. The two have agreed to strengthen trade ties.

Russia is seeking to counter the growing influence of China in Africa and sees Kenya as the gateway to a continent that boasts of an embarrassment of natural resources.

President Uhuru Kenyatta was among African heads of state that attended the first Russia-Africa Summit which took place in the Black Sea resort of Sochi, Russia on October 23–24 as Kremlin made the first move to cement its trade ties with Africa.

Currently, Russia’s trade volumes with Africa stand at about US$ 20 billion, 10% of China’s US$ 200 billion. Russia wants to catch up with China hence the tweak in its Africa strategy to match those adopted by China, US, and Japan which have proven effective in the last decade.

Africa’s growing middle class is creating a huge new consumer market that is attractive to Russian corporations. The potential of trade and investment between Russia and Africa has been demonstrated by the exponential growth of 185% between 2005 and 2015.

Moscow targets to more than double its trade volumes with Africa to US$ 40 billion in five years.

Kenya is held highly in Russia’s policy as a leader in the continent and an engine of economic growth and development. This has been demonstrated by high-level delegation visits to Nairobi and Moscow.

Currently, Kenya-Russian trade is modest compared to total trade between Kenya and other major economic powers including China, India and the United States.

According to Kenya’s Economic Survey 2019, the bilateral trade balance between Kenya and Russia was Ksh 23.2 billion in favour of Russia in 2018.

Russia’s imports to Kenya include wheat, iron and steel, fertilizers, paper and paperboard, articles of pulp, machinery and beverages.

Kenya’s exports to Russia include tea, horticultural products, tobacco, coffee, pulses and spices, among others.

Russia’s corporations such as Gazprom, Lukoil, Rostec, Rosatom, Rosneft and Tafneft have considerably invested in Africa’s oil/gas and mineral-rich countries and are more Russian corporations have expressed an interest in tapping Kenya’s economic potential.

“We are glad that some Russian companies have managed to establish a solid position in the Kenyan market,” Russian President Vladamir Putin told President Kenyatta in a formal meeting during the summit.

President Kenyatta and his delegation that consisted of Trade Principal Secretary Chris Kiptoo and a host of other government officials made the case for more Russian companies to pitch tent in Kenya.

See also: Lessons Africa Can Learn from China to Grow its Economy

This is also an opportunity for Kenya to boost exports to Russia.

Russia has a high demand for horticultural products, tea and other consumer goods.

Kenya has had cordial relations with Russia since its independence in December 1963. During the Cold War, Kenya was part of the Non-Aligned Movement, hence maintained good relations with the Soviet Union.

In the early years of Kenya’s independence, Moscow not only offered scholarships to young Kenyans to study in the Soviet Union but also engaged in infrastructure development including financing the construction of the former Nyanza Provincial Hospital currently known as Jaramogi Oginga Odinga Teaching and Referral Hospital. 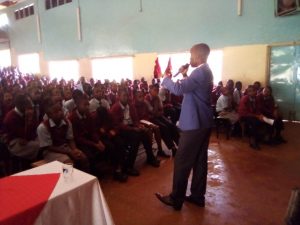