MGTV crew at a past event. The TV station is expected to create jobs for many Kenyans as it seeks to establish in Nairobi. [ Photo / Madgoat TV ]

Mr Badoer, the president of Kenya Premier League side Wazito FC, will be operating Madgoat TV, which has been granted an operating license by the Communications Authority of Kenya.

The license was issued on 24th January 2020, a culmination of Badoer’s efforts to have a presence in the TV industry in Kenya.

According to CA, the license covers commercial free-to-air broadcast services over the next 10 years.  It adds that MadGoat TV (MGTV) will transmit its broadcasts through digital infrastructure provided by authorized signal distributors who include, among others, Signet, ADN and Pang.

“Finally, the wait is over,” said Mr Badoer, excited after landing his hands on the all-important document. “Today (24th January) Mad Goat TV license was approved. MGTV will be on a TV set near you before you soon.”

The MadGoat TV license has given Badoer, a lover of sports especially football and basketball, a chance to have a foothold in broadcasting and expand his media interest in Kenya beyond digital. MadGoat TV has been streaming online, covering Wazito FC games and programmes around the team and its players.

Badoer says the next focus it to rollout broadcasting, which will cover not only Wazito FC, but also basketball, volleyball, hockey among other sports.

Madgoat TV will also offer entertainment programmes as well. “I would love to have rugby and if we can reach a good agreement with federation we will for sure go for it,” he said.

Besides shaking up sports TV in Kenya, MGTV is also expected to create jobs for many Kenyans – journalists and technical operators – as it seeks to establish in Nairobi. It also promises to cause ripples in sports coverage and reporting, with a new style modeled on successful sports channels in Europe.

Mr Badoer says he has already put up a team to spearhead the set-up and eventual launch of MGTV in Kenya. In Kenya, Badoer has interests in banking, media, and sports.

Kenya Basketball Federation (KBF) in May 2019 secured a Ksh100 million sponsorship deal that is expected to boost the sport in Kenya over the next five years.  Badoer Investments Ltd, owned by Mr Badoer, will also own broadcast rights through MadGoat TV. 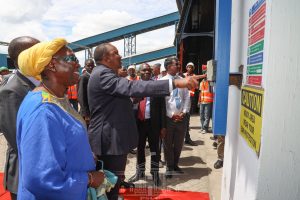