The Kenya Basketball Federation (KBF) has secured a game-changing sponsorship deal that is expected to boost the sport in Kenya over the next five years.  Badoer Investments Ltd, owned by Dubai-based businessman Ricardo Badoer, who is causing ripples in Kenya by splashing cash to promote sporting activities, will sponsor the KBF league for the next five years.

Under the Ksh100 million (Ksh20 million per year) deal, Badoer Investments will also own broadcast rights through his newly launched digital television station, MadGoat TV as well as an upcoming free-to-air TV station.

The deal was signed last night at Nyayo Stadium, where basketball friendlies were taking place between teams from Kenya and Ghana.

The sponsorship also includes providing kits for national, senior and junior teams for both men and ladies. This is a much-needed shot in the arm for basketball, which is largely underdeveloped in Kenya, mainly featuring colleges and young professionals. It will be renewed annually.

Ricardo, a cigar smoker who shoots from the mouth, has gained popularity in Kenya after acquiring National Super League team Wazito FC, where he is ruffling feathers. He has been hard on the players and recently acquired a Sh12 million Mercedes Benz bus for the team after their found their footing, racing to the top of the table standings with four matches to go.

The businessman is scouting for investments in East Africa, and is closely followed by sports fans in Kenya. He has acquired stakes in Sumac Microfinance, Business Today Media Ltd (publisher of this website) and Hakika Microfinance in Tanzania. He said recently he is shopping for a bank in Uganda.

[ NEXT: 20 life-changing lessons from Chris Kirubi ] 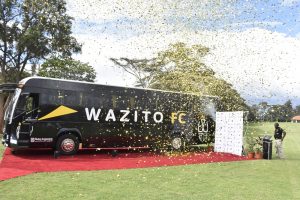