Ricardo Badoer, the Wazito FC President, is seen here smoking his favourite Cigar, the Muwat 7 X 70, during the launch of the club’s Ksh12 million Mercedes Benz bus in May 2019. [ Photo / Business Today ]

Ricardo Badoer, the cigar-smoking President of Wazito FC, shoots from the hip. If you cross his path you will be very lucky to get away without being f*cked up!

On a recent Wednesday when his team, Wazito FC, lost 2-0 to Kisumu All-Stars in a Kenya Premier League match, he had this to say:

“Men like me do not hide when things are bad. On the pitch things are f*cking disaster, even a half-dead blind donkey can see it. What is important is to learn from mistakes. Things will turn around. Other than that I want to congratulate Kisumu for their win.”

Badoer has become a celebrity in Kenyan football since he took over Wazito FC last year and galvanized it – with plenty of ‘F’ words and money – to win the Kenya Super League and return to the top-flight Kenya Premier League.

Beyond his Twitter wars with fans and haters spiced with his flamboyance, many Kenyans barely understand the man who has changed Wazito FC from just another team to one of the most-watched sides in KPL this season.

Besides changing their jersey and pumping money into the team, Ricardo gifted them a Ksh12 million Mercedes Benz bus for winning the KSP. He has promised them greater things, including a world-class football stadium.

On the sidelines, Ricardo is working on building a football academy in Kenya to rival European Standards. He is also sponsoring the basketball league in Kenya.

In a short time, he has transformed sports in Kenya and proved that with financial motivation and a little ass-kicking can drive transformation.

But who is Ricardo Badoer and where does he get the millions he’s splashing on sports in Kenya?

He refers himself as El Presidente (of Wazito FC and CD Ursaria of Spain) and describes himself as an entrepreneur, cigar and timepiece aficionado.

He is the owner of Wazito FC of the Kenyan Premier League (KPL), CD Ursaria of Spanish Divisiones Regionales group II, Business Today of Kenya and  Founder and CEO of Mad Goat TV. He has stakes in Sumac Microfinance in Kenya and Hakika Microfinance in Tanzania.

Even as he struts the globe – he can have breakfast in Kenya, lunch in Dubai and dinner wash down with premium whiskey in Madrid – Ricardo has tasted the downside of life in fair amounts, rising from a poor family to a dollar billionaire.

Badoer says he was born to a Spanish Iranian family. He moved to Sweden at the age of nine with his mother when his father passed away. His mother worked at elderly homes while he acquired education.

Ricardo says they would often survive on rice and tomatoes for three weeks of the month until his mother got paid in the firth week to at least change the diet with some meat.

Badoer started working weekends at the age of 15 in restaurants to support his interest in boxing and judo. He never attended university after upper secondary school. Today, the boy raised by a poor mother dines and wines in five-star hostels and spends most of his time flying around to check on his growing empire.

Badoer says he started his first business at the age of 20, renovating homes with his friend. One year later when visiting Spain on holiday he decided to stay and work as a property agent in Alicante area.

Within a year, he had made enough money to buy a rundown house that he renovated and sold for profit. This slowly evolved into a construction company named Badoer Invest.

Between 2001 and 2008, during the Spanish economic boom, Badoer Invest built and sold properties in southern Spain, making Badoer a multi-millionaire at the age of 25.

See >> A Chat With the Gay But Ambitious Kenyan Businessman

In 2003 Badoer founded Caixa Rico in Panama as a financial services provider and used it as a vehicle to invest in the financial market. Caixa Rico Used Webmoney (online payment settlement system) to avoid high Banking fees.

It was Webmoney that sparked his interest in digital currency. And when Bitcoin was launched 2009, Badoer started using it in his company for settling transfers. He started trading Bitcoin and other cryptocurrencies as a hobby until 2017

Badoer founded his own Digital currency named Aidos Kuneen (ADK) in 2017. It is now trading on 12 different exchange.

Badoer is married with three children. He is a Resident of UAE with several homes in Dubai as well as Spain. Badoer is an avid watch fan with a collection of more than 65 high-end watches. He also can be seen smoking his favourite Cigar, the Muwat 7 X 70.

And in case Wazito FC players think its all rosy, El Presidente is breathing fire. He wants results. And he’s ready to kick ass.

“Soon to be Former Wazito FC players will be finding themselves in looooooong lines,” he tweeted recently. “Good luck,…. Reminder, kindness should not be taken as Weakness.”

Next >> Fancy Paying a Million Shillings in Schools Fees? Here, You Won’t Even be Noticed 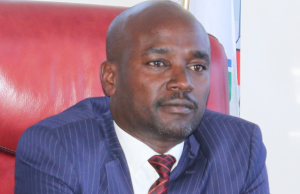