The Nairobi Women's Hospital branch in Nakuru’s CBD. The hospital’s story is one of sheer determination, sacrifice and many sleepless nights for the founder. [Photo/OYK]

In 2001, Dr Sam Thenya realised his dream of having the first of a kind hospital in the East and Central Africa region specialised for obstetrics and gynaecology services.

This easily made the hospital majorly a women-only facility and giving it an edge over others which catered for all patients.

Despite the fact that it was meant to cater to women, it was fully equipped and staffed to handle all general medical and surgical conditions.

Also read: How Medical Bills Are Driving People Into Poverty

The Nairobi Women’s Hospital’s story is one of sheer determination, sacrifice and many sleepless nights for the founder who could not get to practice what he set out to when he worked in another hospital.

For the more than 17 years that it has been in operation, the hospital has been treating “customers of all genders and ages”, according to a statement on its website.

The Gender Violence Recovery Centre (GVRC) is the charitable trust of The Nairobi Women’s Hospital.

The Centre was established in 2001 to provide psychosocial treatment and medical treatment to rape and domestic violence survivors who could not afford treatment.

According to the centre, over 43,000 survivors have been served by the GVRC since its inception.

The GVRC was instrumental in the National Legislation enactment of the Sexual Offenses Act 2006 policy and successfully lobbied for the introduction of GBV studies into the Bachelor of Science – Nursing degree curriculum.

There are several centres around the country set up in collaboration with the various hospitals including the Centre for Assault and Recovery in Eldoret (CARE) situated at the Moi Teaching and Referral Centre, the Coast general hospital recovery centre, Gender Based Violence Recovery Centre (GBVRC) at Kenyatta National Hospital, Taita Taveta District hospital, Biafra Clinic in Eastleigh Nairobi, Jinja District Hospital, Mlago Hospital in Kampala Uganda and Makueni County Hospital Gender Based Violence Recovery Centre (GBVRC).

A statement on the centre’s website reads: “GVRC has a strong voice in lobbying and tracking of implementation of gender legislations. We held active membership to the Task Force on Implementation of Sexual Offences Act 2006 and now the Nairobi Hub – a group of organizations in the GBV sector responsible for putting up emergency response plans in preparation for National Disasters.

GVRC has actively contributed in the development of the National Guidelines on Management of Sexual Violence, development and revision of the PRC Form (gazetted in 2012), drafting of the Gender Policy, and inclusion of the GBV curriculum in the Nursing Diploma curriculum among other national documents.

We are experts in targeted social mobilization strategies, such as the 1 Million Fathers Movement, that calls on men to end Gender Based Violence by loving, cherishing and protecting all the women and girls in their lives. GVRC was a co-convener of the Africa UNiTE-Kenya Chapter; a regional component of the UN Secretary General’s Global UNiTE Campaign that partners with the government and other Civil Society Organizations to end Violence against Women.”

After a billing scandal that now threatens the very existence of the hospital, the facility faces a takeover and probable legal action by its clients.

Two weeks ago, communication between Dr Felix Wanjala and his team was leaked revealing how the hospital had become a money minting entity.

The conversations show the push by Dr Wanjala to meet financial targets by delaying discharges while also admitting cases that would otherwise have been treated as outpatients.

With the revelations, insurance companies swung into action suspending services they offer to the hospital leaving the facility in a precarious situation.

And on Monday this week, the hospital in a communique said that the CEO was stepping aside to allow investigations to be carried out without interference.

These latest developments show that despite its many achievements, the Nairobi Women’s Hospital may have run its successful course and the scandal could suddenly halt this run.

In July last year, Evercare Health Fund, a US private equity fund was cleared to take over the four hospitals among them the Nairobi Women’s.

The others were Metropolitan, Avenue and Ladnan hospitals which were under the troubled Abraaj.

There are several other investments in Kenya under the CMC Group under which Evercare Health Fund falls.

The hospital’s fortunes could, however, change depending on what happens with those taking care of the Bill and Melinda Gates interests in the facility.

The hospital has grown to include the Nairobi Women’s Hospital College established in June 2008.

Approved by the Technical and Vocational Education and Authority of Kenya (TVETA), the college was accredited in October 2011 by the Nursing Council of Kenya (NCK) to train nurses under the Kenya registered Community Health Nursing Programme.

Since its inception, the college has graduated over 300 skilled and competent health workers who have been absorbed into the job market in their various areas of specialty.

The Story of Nairobi Women’s Hospital

In a 2016 interview with Business Daily, Dr Thenya said he trusted the services offered at the hospital to the point that his daughter was born the hospital’s Hurlingham branch.

On how he started the hospital, he said that he had pitched the idea to the CEO of the hospital he was working in. As fate would have it, the employer was not keen on the idea which including taking in abused women for free.

“Abused women didn’t even trust their gynaecologists to begin with. So this one time he told me that if I thought the idea would work then I should go ahead and open my own hospital because it wasn’t going to work at that hospital and right there I thought to myself, “Why not?”,” the paper quotes.

You can get the entire story about what Dr Thenya says was the trigger that he needed to start Nairobi Women’s Hospital.

Having sold the majority of his stake to the PE firm, Dr Thenya’s Director of Strategy role at the hospital is largely ceremonial meaning he can now only watch whether his baby survives or if it is thrown out with the birth water.

For detail on how the Nairobi Women’s Hospital got here, the Elephant has a detailed and more technical explanation. 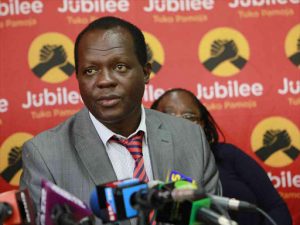