Accusation’s range from unnecessary admissions to exorbitant charges to rake in top dollar.

The massive withdrawal of partners in a business is an investor’s worst nightmare and this could have sounded the death knell for Nairobi Women’s Hospital after insurers withdrew their services.

And on Monday, a statement from the Nairobi Women’s Hospital indicated that the facility’s CEO Dr Felix Wanjala had resigned to pave way for investigations.

For the past two weeks, the hospital has been roiling in the aftermath of a scandal that has threatened the very existence of the hospital.

Ranging from unnecessary admissions to exorbitant charges for the hospital to rake in top dollar, the CEO’s resignation comes amidst the chaos that he was pushing his staff to meet targets that were too far from quality health.

“Following a meeting of its Board, the Nairobi Women’s Hospital confirms that Dr Felix Wanjala has agreed to step aside while both an internal review and an independent inspection by the Kenya Medical Practitioners and Dentist Council are carried out,” noted the statement.

The board said that in the absence of Dr Wanjala, the leadership of Nairobi Women’s Hospital will be undertaken by an Operating Committee reporting to the board.

“This committee is comprised of three Evercare representatives.”

The board did not go into detail as to who Evercare is and also whom the representatives were.

It, however, said that the decision was “a priority to allow the review process to take place in the best possible conditions, in order to ensure clarity on the allegations that have been made.”

The board said that they expected “this process will be concluded shortly, and we will update all stakeholders in due course.”

Wanjala has been at the Nairobi Women’s hospital for six years.

As mysterious as the dealings at the hospital have been, so is the group that is now overseeing the operations at the scandal-hit hospital.

According to information on the Evercare Health Fund’s website, the American PE firm has invested in 72 companies in Kenya shown below.

Evercare’s Investments in Kenya cut across several sectors including real estate, agriculture and health among others.

In the health sector, Evercare has control of Ladnan, Metropolitan, Avenue, and Nairobi Women’s hospitals.

It is the latest happenings at Nairobi Women’s that have put the hospital in a situation where Evercare representatives have been incorporated in a committee to oversee what is now a looming transition for the facility.

Evercare has not always been known by that name since it rebranded from TPG which was associated with the Abraaj Group, a private equity (PE) firm operating in six continents. It was founded by Arif Naqvi, a Pakistani businessman based in Dubai.

In 2018, Abraaj was caught in the midst of misusing a US$1 billion healthcare fund from investors including the Bill & Melinda Gates Foundation and the IFC. It filed for provisional liquidation following the dispute for investments across different markets.

The PE firm has been on a whirlwind of renaming and rebranding throwing those following its developments into confusion. But, back to Nairobi Women’s Hospital.

Evercare Health Fund may have to take over the hospital which has seen insurance companies pull out following an exposé regarding how the facility was extorting those who sought treatment in its branches.

The US-based PE firm oversees operations at the hospital on behalf of the Bill & Melinda Gates Foundation and US pension funds providing financing for healthcare investments. 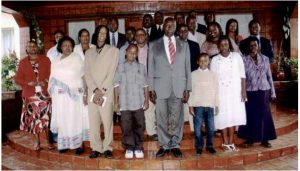