The two were blessed with eight children – five sons and three daughters.

Lena, a trained teacher herself, later took up the role of a full-time housewife to raise the children as Moi’s political career flourished and had to spend more time away from home.

But perhaps the best known of Daniel Moi’s children is the last born and current Baringo Senator Gideon, born in 1964. Moi‘s firstborn, Jennifer Chemutai Kositany, a Kenya High School alumna, who later pursued university education in the United States, was born in 1953. Her husband Stephen Kositany, brother to the current Soy MP Caleb Kositany, died in a road accident.

After Jennifer came rally ace, the late Jonathan Toroitich. Jonathan and his revered Toyota Celica amassed numerous awards and participated in various competitions including Caltex Equator Rally, which was held in Nairobi.

He passed on in April 2019 after a long battle with cancer. A third child, John Mark, was born in 1958 and lived briefly in the United States before returning home.

The current Rongai MP, Raymond Moi, born in 1960, followed, after which came twins, Philip and Doris, born in 1962. Philip is a retired army Major.

Doris, on the other hand, has kept away from the glare of public light except when she was recently hosted by Rt. Hon. Raila Odinga.

She is an alumna of Nairobi Primary School, Limuru Girls School and the British-curriculum Imani School in Thika. She studied in Australia.

Ibrahim died in a road crash in June 1998. June, the youngest, is Moi’s adopted daughter. She attended Nairobi Primary School, Kenya High School and university in Canada. She is a successful businesswoman.

The former President Daniel Moi never remarried. Mama Lena retreated to a quiet life at her Kabimoi Farm where she passed on in July 2004. She was buried in Moi’s expansive farm in Kabarak. Moi visited her several times while ailing, and was with her hours before she passed on.

Moi’s father, Kimoi arap Chebii, died in 1928 when the former President was only four years old and little is known about his mother, Kabon, except that she died shortly after Moi was born. 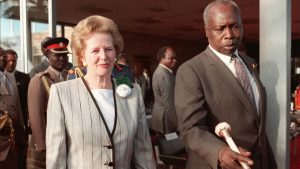