Former President Daniel Arap Moi with British Prime Minister Margaret Thatcher. A WikiLeaks dossier hinted at Moi’s wealth being so much that the man was treated as a matter of national security. [Photo/KBC]

Today the world bids goodbye to the Late President Daniel Arap Moi whose exploits endeared him to some while at the same time creating enemies.

But when it comes to wealth, the empire is conservatively estimated at Sh310.2 billion (US$3 billion).

So rich was Moi that his wealth is now held in trusts with front companies in Kenya, relatives and friends and in offshore tax havens.

It is also spread out in several local and international banks.

A WikiLeaks dossier hinted at Moi’s wealth being so much that the Union Bank of Switzerland treated the man as a matter of national security.

In addition to Switzerland, others that found Moi to be good for business were Russia, the UAE, Puerto Rico, Somalia, South Africa, Sudan, Uganda and Zaire.

Since Moi’s wealth is spread across many sectors in Kenya, the sentiments by the Swiss bank could not be far from the truth.

With the demise of the icon, the Mois now own thousands of acres of land whose value in is the billions of shillings.

In addition, the family which is a great player in the financial sector owns or has shares in the First American Bank, Giro Bank‚ Equatorial Bank, Sovereign Group, Giant Forex Bureau and Equity Stock Brokers.

Already, the Trans-National Bank has been fully acquired by the Access Bank, a Tier 1 lender in Nigeria.

The CBK says that the Nigerian Lender will assume full control of the bank in February this year following preliminary approval of its takeover bid in December 2019.

“This follows (the takeover) CBK’s approval on December 24 and approval by the Cabinet Secretary, Treasury on January 6, 2020,” CBK said in a statement.

See>> Life & Times of Moi: The Rise From Herdsboy to President

In media, the family owns Standard Group, Kenya Television Network, KTN, Standard Newspaper, and some radio stations. Rowland Printing and Baraza Limited are also some subsidiaries owned by the Mois.

The company is headquartered in Kenya but has operations in Tanzania and Uganda. There are several more companies in the freighting industry for the Mois which include a part of the Kenya Airways fleet.

During the national agricultural fairs, Moi was always called mkulima nambari wani. This was all because the family has under its agri-business portfolio Sian roses, Fresh Produce Ltd, Sasine Group of farms, Chemusian Company, and Kiptagich Tea Estate. In Malawi, the Moi family owns a tobacco farm.

In telecommunication, the family has a sizeable share in Safaricom while also having stakes in Cable Wireless and Chesco Ltd.

Moi was a champion for education and he invested heavily in the sector. His most known institutions are Kabarak University and Kabarak High School. In addition, he owns Sunshine National School, Sacho High School, Moi Educational Centre and the Moi Africa Institute Kabarnet Gardens. The family also has interests in many other international and local schools.

The hospitality industry has Moi’s hand in the InterContinental Hotels, Sheraton Group (Sheraton Holding) and Safariland Club. The family’s hotel and tourism interests are spread across the industry.

There are many other interests that are spread in several other businesses making Mois one of the wealthiest in Kenya and probably globally. 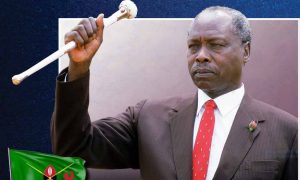 Magic Behind Moi’s Rungu, the Rose Flower and Other Mysteries
President Moi will also be remembered for his sharp dressing…