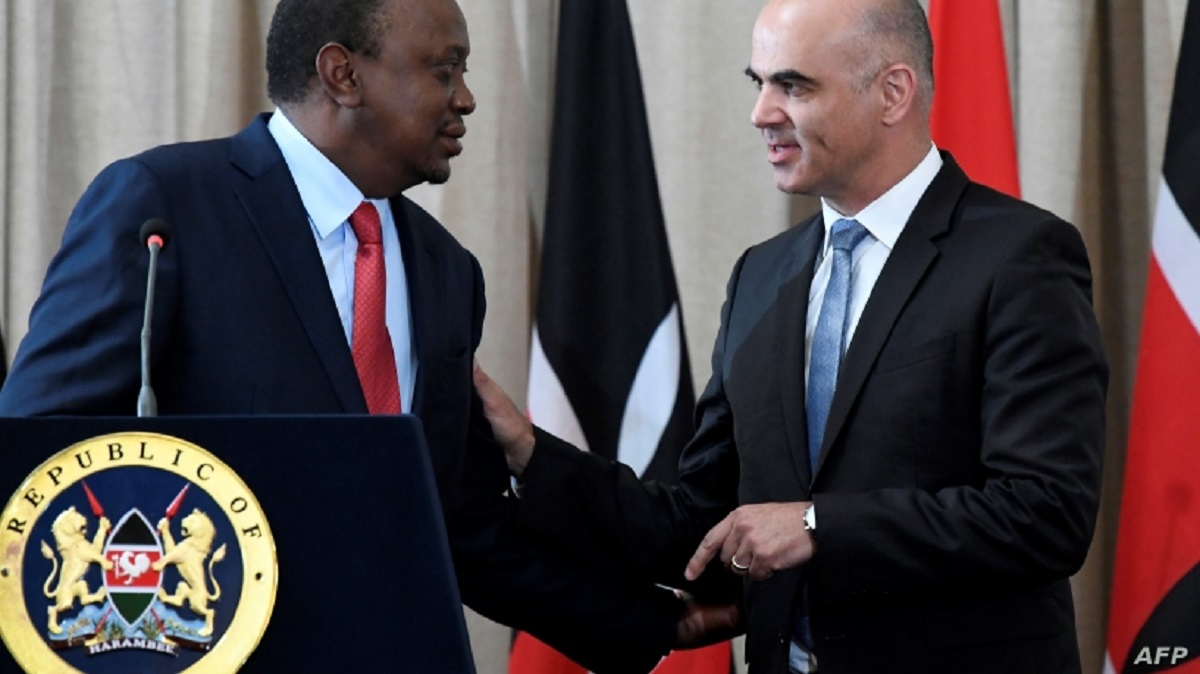 President Uhuru Kenyatta with Swiss President Alain Berset. The two signed an agreement in July last year for the repatriation of stolen wealth from Switzerland to Kenya. [Photo/Voice of America]

The report by the National Bureau of Economic Research (NBER) last year revealed that Kenya’s wealthiest individuals are hiding the stolen money in offshore accounts.

These revelations came even as the Kenya Revenue Authority (KRA) continued struggling to hit tax targets.

According to the NBER report, the stolen wealth represented about 65% of Kenya’s Gross Domestic Product (GDP).

To beat the systems, these offshore account holders bypass Kenyan laws to evade paying taxes and to protect their ill-gotten wealth.

In an ironic twist, former KRA Commissioner-General John Njiraini’s name was mentioned in court early this year over an ownership battle of a roofing materials company, Space & Style Limited.

Njiraini’s name came in an accusation in court that the former CG was using his position at KRA to harass Njama Wambugu over a shareholding dispute in the company.

In the court documents, Wambugu claimed that Njiraini operated an offshore company, Decamis Limited which is registered in Hong Kong.

On January 31, 2019, Justice Aaron Makau referred the dispute to arbitration but Ngumi, Space and Style Limited and her newly appointed co-directors moved to the Court of Appeal saying there was no dispute requiring arbitration.

For 2019, the tax collector was projecting a 40% growth on the rate of tax returns compliance this year.

More than 4 million taxpayers were expected to submit their returns on the iTax Platform by June 30, 2019. However, KRA registered a shortfall of more than 400,000 Kenyans saying that more than 3.6 million Kenyans filed their 2018 tax returns by June 30, 2019.

“The improvement is significant with more than four hundred thousand taxpayers filing their 2018 tax returns compared to last year, which saw 3.2 million Kenyans file their returns by 30th June,” said a statement from KRA.

The tax collector had been running a campaign dubbed Tujijenge (Let’s build ourselves) seeking to encourage taxpayers to comply with their tax obligations by filing their 2018 income tax returns.

Elizabeth Meyo, KRA Commissioner for Domestic Taxes, said during the campaign launch that this year the tax filing season was also opened for tax defaulters to pay their dues.

To meet targets, KRA has introduced a number of initiatives over the years including the online platform; iTax and enhancing digitization.

While Kenya continues suffering the effects of stealing, it is evident that KRA is only interested in combating tax evasion by the small businesses and not those engaged in multibillion-dollar businesses.

The lethargy in enforcing tax compliance across the board has seen the wealthiest in Kenya continue enjoying tax breaks which small businesses do not.

In the 2017/18 Budget statement, Treasury Secretary Henry Rotich gave Kenyans with wealth abroad one more year to repatriate it.

This effectively kept the amnesty window open beyond the June 2018 pushing it to June 2019. Nothing much has been said or done since then and repatriations have been lacklustre.

KRA says there have been concerted efforts to combat tax evasion and fraud using intelligence but the high taxation rate and mediocre incentives dissuade those interested in investing locally.

In August last year, Britain signed a key agreement in Nairobi to repatriate all proceeds of crime stashed away in all its jurisdictions.

The signing of the agreement was witnessed by former British Prime Minister Theresa May and President Uhuru Kenyatta.

In the same month, Mauritius said it was open to a deal that would see such individuals investigated and their wealth repatriated to Kenya. If finalised, the agreement will be modelled along the one signed between Kenya and Switzerland.

The Kenya-Switzerland deal could see as much as Kshs72 billion returned to East Africa’s economic hub.

So far though, nothing much has come from these agreements. This raises several questions key of which is how much longer the corrupt will continue enjoying stolen public resources while Kenyans continue suffering.

Read >> Billionaires Increasing in Kenya as Majority Slide Into Poverty

Kenya had earlier seen the Paris Club of international creditors accept a request for debt servicing suspension from January to the end of June,

The increased costs are sure to affect numerous individuals and households in Kenya.

The bus was developed in line with specifications from the Nairobi Metropolitan Transport Authority (NAMATA).