SportPesa will no longer be the main partner for Everton FC. Everton says that the partnership agreement with SportPesa will come to an end of the current season. [Photo/Business Today]

Betting firms SportPesa and Betin have halted their operations in Kenya, the lowest point in the long-drawn taxation and regulatory tussle with the Kenya government.

It will shock many Kenyans that SportPesa has closed.

In an internal memo quoted by Citizen Digital, Betin Managing Director on behalf of Gamecode Ltd further issued a notice of termination to all staff citing financial constraints.

“…As a result of the deterioration of the profitability, the management has had to rethink its operations model and proceed with the exercise of termination on account of redundancy,” read the memo in part.

According to Betin, attempts to find an alternative between July and September this year have been futile making it financially impossible to maintain the workforce.

The firms that have been in operation in the country for an average of five years, noted that they had several extensive meetings with relevant government entities regarding the company’s license renewal without much success.

In the memo, the positions of all staff will be rendered redundant on October 31, 2019 in accordance to the Employment Act 2007.

“We shall have consultations with employees in an effort to achieve smooth redundancy process,” read the memo.

On their part, SportPesa expressed disappointment with the government’s decision to impose a 20 percent excise tax on all winnings.

In a statement to newsrooms, SportPesa faulted former Treasury Cabinet Secretary Henry Rotich for the move terming it a misunderstanding of how revenue generation works in the bookmarker industry.

“Further compounded by the currently in-effect 20, withholding tax on winnings, the economic incentive to place bets will be completely removed as the taxes deprive consumers of their total winnings,” read the statement by SportPesa.

According to SportPesa, the move will have severe consequences on betting firms, a decline in government tax revenue to near zero and will halt all investments in sports in Kenya.

“Until such a time that adequate taxation and non-hostile regulatory environment is returned, the SportPesa brand will halt operations in Kenya.

The decision however comes a month after the gaming firm was cleared by the Kenya Revenue Authority (KRA) to apply for fresh operating license and after the government ordered telcos to shut down their paybill numbers and short codes as well as those of 26 other companies.

This was after the team constituted to review their betting and gaming licenses failed to green-light their operations in the country.

The firms are said to have failed to prove that they were tax compliant as required by the Betting Control and Licensing Board (BCLB). 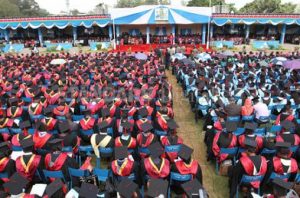 Highly Marketable Degrees in Kenya
Degrees are not equal