Earlier this week, a leaked conversation from a private meeting between President Uhuru Kenyatta and his advisors went viral after it emerged that the head of state was unaware why Kenyans are broke.

At the meeting held at State House, Nairobi, Kenyatta seemingly put his trusted men to the task to explain why Kenyans don’t have money in their pockets. The president fails to grasp why the public is yet to feel the economic impact of the grand projects that his administration has initiated.

The consequence of the report which first appeared on People Daily which ironically is owned by his family was an online furore that if not checked might lead to the formulation of perceptions against the head of state.

Some of the public statements he’s made during his time in office are so bizarre that it is unfathomable to think that his predecessor, Retired President Mwai Kibaki would have uttered anything close.

Kibaki was firm but dismissed criticism he felt was unwarranted in a comical way, a far cry from President Kenyatta’s style.

Today we look at ten things that Uhuru has said in the last six years that wouldn’t be associated with President Kibaki.

1. I Don’t Understand Why Kenyans are Broke

With time fast running out for the president and many of his promises unmet ahead of the 2022 election, President Kenyatta put his people on the spot seeking to know where all the money the Jubilee administration has pumped into projects is going.

“The President wondered where all the money being used to construct government projects is going. In fact, he specifically asked us the question: Why are people broke; why is it that there is no money in their pockets?” People Daily quoted a government official who attended the meeting.

Kenyans who took to social media to express their opinion on the president’s sentiment were at pains to explain why their leader chosen to lead the country to new dawn doesn’t have a clue on issues bedevilling the country.

Kibaki, celebrated for growing the country’s economy after years of stagnation under Moi was very careful with his words especially when it came to how Kenyans were doing financially.

2 I Don’t Need Kamba Votes to Win the Election

In the build-up to the August 8 presidential election, campaigns were in full gear, the ruling Jubilee Party and the opposition coalition, The National Super Alliance (NASA) were putting out all stops to make sure that they wrestled votes from rival strongholds but during a campaign in Wote, Makueni County but President Uhuru Kenyatta made a remark that trashed all inroads that Jubilee had made in Ukambani with many Kenyans questioning why he was seeking votes in the region in the first place.

“I don’t need your votes to win an election because I have already won. Kenyans have decided that it is Jubilee and it’s your decision to join them. The good thing is that I have already beaten them (nASA) based on statistics.

President Kenyatta was lampooned by Kenyans after appearing to be toothless in the war against corruption during an anti-corruption summit at State House in October 2016.

The president was criticizing institutions tasked with the fight over their failure to make any meaningful convictions and exposing the government to criticism that it was letting down the war on corruption.

“The rule of law means that those who are wrongfully accused will get justice and those who are guilty will pay the price. Who releases people (suspects) on bond every day, it is you. What does that got to do with me? i don’t even have the power to appoint you or sack you, so mnataka nifanye nini jameni? ”

President Kibaki was decisive and never made excuses for underperforming appointees. Remember when he sacked his entire cabinet over defying him on the constitution he was backing? He also sacked individuals implicated in corruption and made Kenyans have faith in his leadership.

Read: Critical Issues That the Next Constitution Must Address

Irked by print media reports that Deputy President William Ruto was losing grip of the Rift Valley region due to the emergence of dissenting voices in the DP’s political backyard led by then Bomet County Governor Isaac Ruto, President Kenyatta turned the heat on the media accusing the fourth estate of peddling propaganda to unsettle the ruling coalition.

It was not the first time that the president was uttering the words but the conviction with which he said the words at that time set tongues wagging.

“We are here to find out whether what the newspapers are reporting is true. They keep claiming that you no longer believe in my deputy’s leadership and you are tired of him. Those are lies and stupidity so I will repeat what I have kept saying in the recent past that the newspaper is only good for wrapping meat in butcheries”

Angered by the consistent appointment of old people to plum government positions, Kenyans took to social media to express their anger over the president’s decision to overlook young and more qualified individuals in favour of political rejects who are well connected.

The uproar was triggered by the president appointing 91-year-old former vice president Moody Awori as Chairperson of the Sports Fund.

I have seen that I am being criticised in different quarters over appointing a 91-year-old to head the Sports& Youth Fund but my critics should put themselves in my shoes, you have seen how the youth in public positions is looting public coffers. I have made the decision to stick with the old guys who are safe hands who will account for every penny of public funds and I am unapologetic about that

President Kenyatta left Kenyans puzzled when he skipped the 2017 presidential debate while his competitor, National Super Alliance (NASA) candidate Raila Odinga attended the engagement with journalists with reports indicating that his handlers were concerned that the platform would be used to bash his record during his first term in office.

But during a campaign in Nyeri, the president was unapologetic about his decision and instead threw jibes at Raila.

‘Yesterday I watched my competitor during the debate claiming that the reason he did not fight corruption during his stint as Prime Minister in the Grand Coalition Government is that he was just a coordinator of government activities. What kind of person is that? I looked at him talk and thanked God for giving me the wisdom to skip the debate

President Kenyatta was addressing security personnel at the Kenya School of Government (KSG) and after he concluded his speech, he ordered journalists to pack up and leave since their job at the function was done. 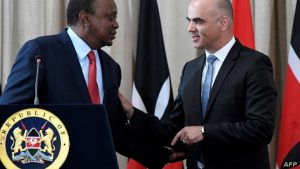