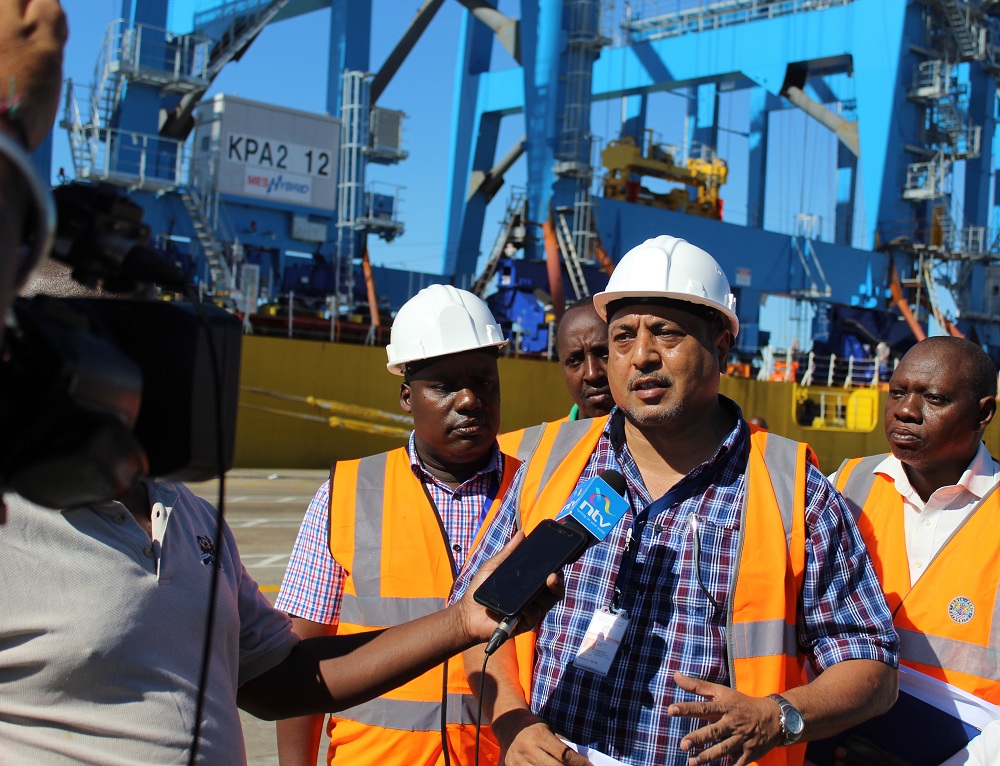 Kenya Ports Authority has  acquired one new Ship to Shore (STS) Gantry Crane and eight Rubber Tyred Gantry (RTG) cranes to boost efficiency and productivity at the Port of Mombasa.

General Manager Engineering Services Rashid Salim, who received the equipment on behalf of the Managing Director Catherine Mturi-Wairi, said this was the first consignment of the four (STS) and 12 RTGs ordered by the Authority from Japan at a total cost of Ksh 6.68 billion.

The new arrivals bring the total number of RTG cranes at the Port of Mombasa to 46 and STSs to 13, which means that the movement of import containers from the berths (and export containers to the berth) will be more efficient.

The cost of one STS is Ksh 947 million while each RTG costs Ksh 185 million.

“Today we are receiving the first consignment of the cranes. We expect the second shipment in May this year,” said Salim.

He said the new equipment will be deployed at the Second Container Terminal which has been operational since April 2016 to increase off -take of cargo at the Port.

The new STS main features include capacity to lift two 20 foot containers in one move, safe working load (65 tons), ability to handle ships up to 18 containers (45 meters across), advance crane monitoring system while the RTG has a hybrid power system which results into improved fuel efficiency of up to 50 percent and reduced carbon emissions.

It also has an advanced crane monitoring system, automatic steering and is also installed with accurate container load weighing system.

The equipment comes at a time when the Authority is undertaking massive infrastructural developments and port capacity expansion programmes aimed at improving operational efficiency.

The first phase of the Second Container Terminal with an annual capacity of 550,000 TEUs was completed at a cost of Ksh 28 billion and plans are at advanced stages for the beginning of the construction of the second phase which will increase the port’s capacity with an additional 450,000 TEUs.  In 2017, the new terminal alone handled nearly 300,000 TEU’s.

Once phases 2 and 3 are complete, the total capacity of the Second Container Terminal will be 1.5 million TEUs, raising the Port’s total container handling capacity to 2.65million TEUs by 2025.

The acquisition of KPA’s equipment is part of the Mombasa Port Development Programme for the Second Container Terminal (CT2) financed by Japan International Cooperation Agency (JICA).

The recent capacity expansion including initial dredging of the port channel, berth construction, upgrading of equipment and ICT Systems has given the Port of Mombasa a competitive advantage. The Port can now accommodate bigger vessels with larger capacities hence offering competitive services occasioned by economies of scale.

The Port of Mombasa is currently the deepest in the East and Central African region and can accommodate panamax container ships of up to 8,000 TEUs. The shipping industry is shifting towards larger vessels. The Authority is also dredging the navigational and anchorage basins, and installing modern navigation aids to allow access of post panamax vessels. This has enabled the port to handle bigger vessels.

The Port serves over 33 Shipping Lines that call regularly and provides connectivity to over 80 seaports worldwide.

In August 2015, one of the largest ships MV Clemens Schulte docked at the port. The vessel, spanning a length of 255 meters and 37.5 meters wide, with a capacity of 5,466 TEUS offloaded 1,710 TEU’s and loaded 3,505 export containers. In the succeeding years (2016 and 2017), other large vessels namely; MV Ital Mattina and MV Ever Delight with a total length of 264 and 294 metres respectively, have since successfully docked at the port of Mombasa.