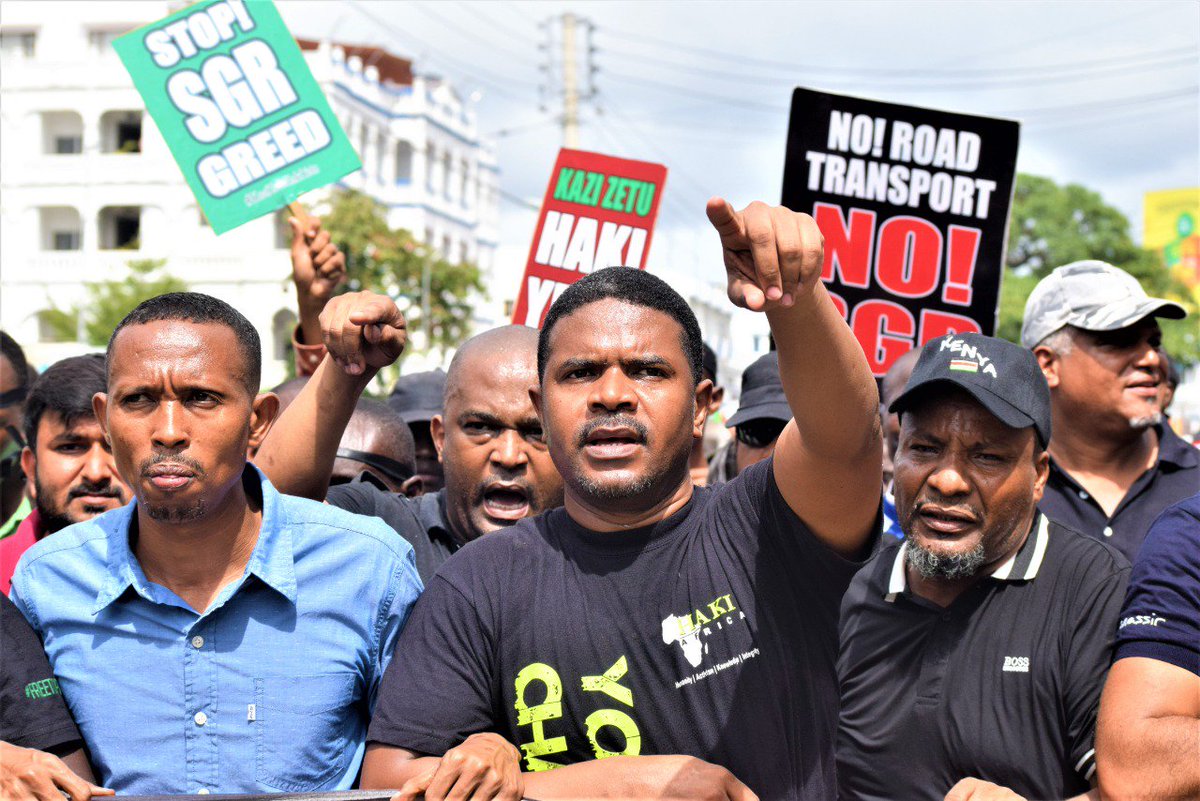 An earlier anti-SGR Protest in Mombasa. A journalist was attacked while covering a protest on Monday in a series of sustained attacks against reporters. [Photo/Mohammed Ali]

Civil society groups and business operators in Mombasa have been staging protests against a directive issued last year by the government that they say it hurts their businesses.

The protests which also include cargo handlers are against the directive in August last year which made it mandatory for all haulage to be done through the Standard Gauge Railway (SGR).

Protesters insist that businesses in the transport and extending to hotel industries and other service sectors are hurting from the directive.

During the protests on Monday, several demonstrators were arrested with the police lobbing teargas canisters to disperse them.

Under the First Action Movement group, the demonstrators had converged at Uhuru Gardens and moving towards the Mombasa port.

Journalists covering the event have not been spared either with the latest being Nation photojournalist Laban Odhiambo Walloga who was attacked by the police in his line of duty.

According to the Coast Media Welfare Group, the attack on Waloga is an affront on press freedom.

“The Coast Media Welfare Organization is dismayed with reports that police attacked a Nation photojournalist Laban Odhiambo Walloga who was covering the anti-Standard Gauge Railway protests in Mombasa. The organization takes this early opportunity to condemn the violent acts on a harmless press photographer who was simply doing his job.”

The organisation said Monday’s attack comes at a time when there is growing concern about the shrinking space of freedom of expression, growing repression of alternative voices and unwarranted ignorance of court orders.

“Press freedom is essential to democracy and that is why press freedom and journalism is nurtured and protected by state and non-state actors in mature democracies. Article 33, 34 and 35 of the Constitution safeguards Kenya’s freedom of expression, free and independent media and access to information. However, today’s act provides the first-hand experience of how this space is being restricted making it virtually impossible for journalists to carry out their trade,” said a statement from the organisation.

It added that Article 34 (2) emphasizes that the State shall not exercise control over or interfere with any person engaged in broadcasting, the production or circulation of any publication or the dissemination of information by any medium; or penalise any person for any opinion or view or the content of any broadcast, publication or dissemination.

“Constitutionally speaking, Kenya aspires to be in the league of mature democracies but attacks on unarmed citizens is a major blot on the gains in the fight against state control and repression. The attacks on Laban is a stark reminder that journalists in Coast region have been unable to operate freely due to an environment of threats, harassment and intimidation against journalists which at times turn uglier and degenerate into actual assault and even mysterious deaths of our colleagues,” added the statement signed by the group’s Chairperson Maureen Mudi.

“It is imperative to note that since 1998, six journalists have died under mysterious circumstances either after being run over by speeding vehicles or turning up dead in their houses in pools of blood in the Coast region. Investigations into these deaths remain inconclusive.”

The association is demand that the circumstances of the attack on Laban be investigated while also urging the government to ensure that the space for journalists who report on duty holders’ and individuals is upheld to ensure develop an open, transparent and accountable society.

In April 2013, a journalist with The Star died in mysterious circumstances.

Benard Wesonga had written about expired fertiliser worth tens of millions. In Kenya, such would find its way into the market somehow. The Kenya Bureau of Standards (Kebs) had reportedly netted the contraband fertiliser at a godown in Changamwe.

On April 16, 2013, the State was to file an intention to open a public inquest into the death of Wesonga at the Mombasa court. If this happened, nothing has come of it.

Three years later, another journalist died after having a meal with a politician.

Joseph Masha who worked for The Standard, allegedly had dinner with a local politician they had differences with. The dinner was meant to help the two mend fences following their not-so-rosy relationship.

According to the Nation, family members said that the politician in question had complained of a story in The Standard on August 31 where Masha analysed Kilifi politics.

Allegedly, the politician complained that the story could cost him votes.

To avoid such cases, the association adds that the state and every agency that draws its legitimacy from the Constitution has an obligation to observe, respect, protect, promote and fulfil the rights and fundamental freedoms in the Bill of Rights, including freedom and independence of the media.

Here is the Media Council of Kenya’s reaction to the attack: