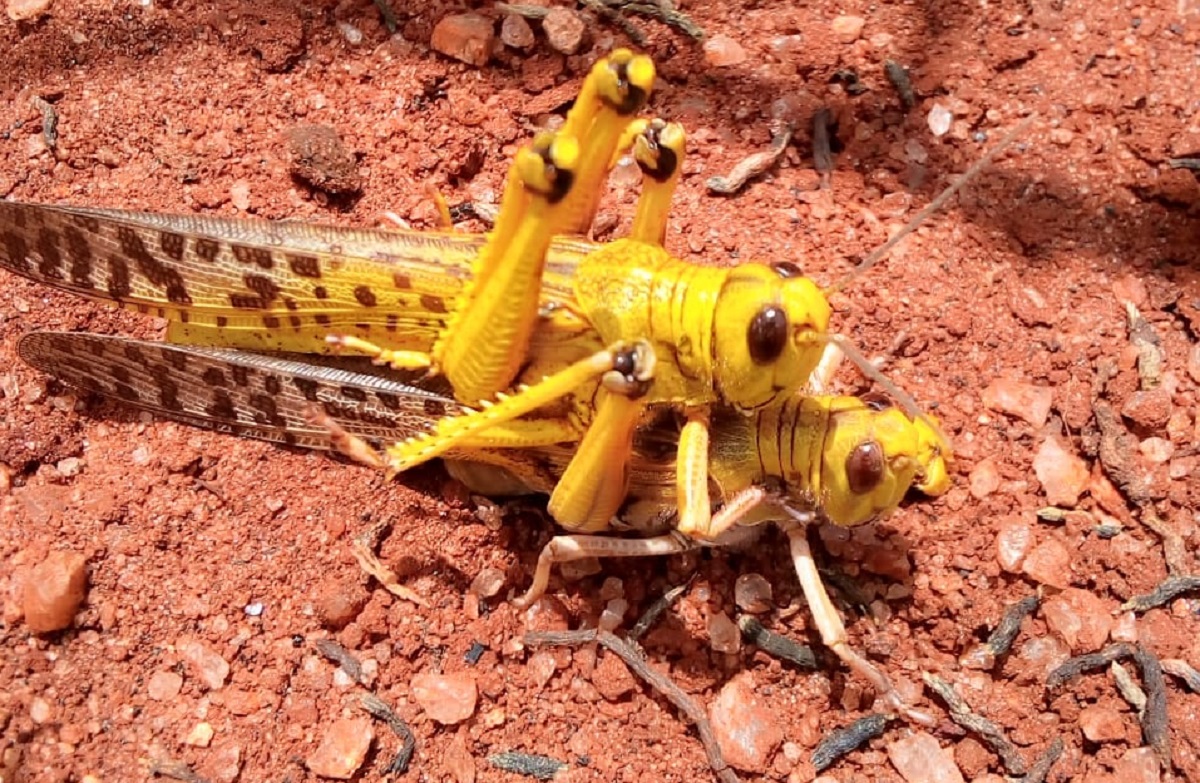 Desert Locusts mating. The FAO says that the situation in East Africa is extremely alarming and will get worse with new infestations. [Photo/FAO]

The government has seemingly slowed down the response against the desert locust invasion which continues in the different parts of the country.

With this, the country faces another challenge in the coming months where hunger could affect millions of Kenyans. Farmers who cannot deal with the menace alone seem to have been left to their own ways to deal with the locust which has affected several countries in the Horn of Africa.

In response to this abandonment, Greenpeace Africa’s Food Campaigner, Claire Nasike has said that the government should put in place measures where efforts are not just focused on fighting the covid-19 coronavirus alone but also the locust problem.

See: Why Now is the Best Time to Invest in Real Estate

“While the government is putting a lot of effort into dealing with the COVID- 19 crisis, it must not abandon the war against locusts. Deprioritising the fight against locust invasion will put Kenyans at a greater risk of suffering another shock in the coming months,” she said.

Responding to reports that Kenya’s government has abandoned the fight against locusts which are still ravaging many parts of the country, she added: “The locust invasion poses a great threat to food security in the country. The new swarms of locusts are now ravaging the highland areas which are Kenya’s breadbasket. The Ministry of Agriculture needs to move with speed to contain the current invasion to curb food shortage which could result in more suffering. There is a need to get rid of the eggs laid by the locusts before they start hatching into new swarms.”

While acknowledging that the fight against the virus should also be prioritised, Nasike said, “The covid -19 pandemic has presented a challenge to many systems in Kenya.  And more than ever before, there’s a need for Kenya’s government to coordinate and ensure that different Ministries deal with different challenges facing the country right now. The Ministry of Agriculture should strengthen its food systems and all the structures that are vital for the survival of its citizens especially in such times of crisis.”

Greenpeace Africa is calling on Kenya’s government to assess the current health and food crisis from a holistic point of view and come up with measures to cushion Kenyans against hunger in the coming months.

In February, FAO said that the desert locust situation is extremely alarming and will be further exacerbated by new infestations expected in early April of this year, the Food and Agriculture Organisation (FAO) is warning.

A new generation of locusts is expected to hatch in February with new swarms expected in early April that would coincide with the next planting season, says the UN body.

UN-FAO is cautioning that at that time, the seasonal winds will have shifted to the north, which is likely to allow the newly formed swarms in Kenya to reinvade Ethiopia and Somalia as well as to migrate to new areas of South Sudan and Sudan.

FAO, in its latest update, says that the Hopper bands continue to develop and form an increasing number of first-generation immature swarms in northern and central counties. Further concentration are expected in Marsabit and Turkana.

The UN body says that aerial and ground control operations will continue.