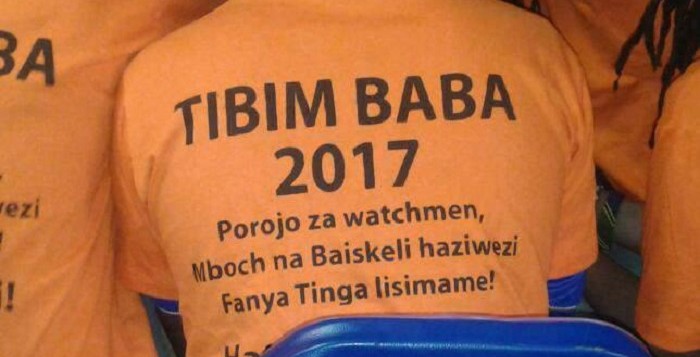 If you shouted in a crowd the word, ‘Tibim!’ you are likely to get chorus response of ‘Tibiiiim’. TIBIM was popularized as a campaign slogan by the NASA team in the run-up to the 8th August general elections in Kenya. It was such a powerful slogan that would enthuse and charge crowds, including even in the NASA opponents’ strongholds.

The usage of the word in Kenya traces its origin to Nairobi University student leader Babu Owino who used it during a public rally at the college. According to Mr Owino, now Embakasi East MP, Tibim is basically a word that holds a revolutionary meaning.

“Tibim is a Greek word meaning revolution,” he said in a TV interview, “a political revolution.” The phrase was amplified by musician Eng. Onyi Jalamo in a song that became the official NASA campaign anthem. Siaya county senator James Orengo termed Tibim as an acronym that means “together in building an irresistible movement,” he said.

Others have different feelings about it. Dr Mumbi, who runs a TV show on YouTube, says Tibim means “Praise the devil” while its twin “Tialala” means goddess of war. But that’s here nor there.

Here is the Horoscope and Astrology meaning of the name TIBIM. With a name number 8, you’re administering planet is Saturn. Companions respect you since you are persevering, a driven individual with moderate yet certain advantages. Surprising focus and benevolence for a choice or target. In the event that you get to be affluent, you are fiscally liberal. You are exceptionally equipped in your general vicinity of work, you are an ace of things who regularly observes the greater and long-term picture of things. You like flawlessness, additionally get a kick out of the chance to unwind and appreciate life as it comes.

Business-like. Indeed, even very still, your brain is considering how to enhance or grow a circumstance. You blossom with getting what comes about, and being the chief of your own ship. Your qualities lie in your excellent capacity to withstand hardship, your devotion to an objective, and your sheer assurance to succeed. Dull side? Some of the time too speedy to judge others.

LISTEN TO THE TIBIM SONG IN THE VIDEO BELOW

Raila Odinga, commonly known as Baba, branded himself as a reformist and “Prophet Joshua”, who would deliver Kenyans from bondage in “Egypt” (Uhuru’s administration) to the “Promised Land” – Canaan, which means prosperous leadership. Caanan found itself into common lingua with many Kenyans turning it into a subject of humour and a representation of good life.

After the court nullified the presidential election, some Kenyans drew parallels in the Bible, arguing that the journey to Caanan was never easy, taking 40 years, and so was Kenya’s political emancipation. The witty ones noted that the Book of Johua in the Bible is followed by Judges, intimating that Supreme Court judges would determine Kenya’s fate, in line with the biblical chronology of books. But the question remains, has the journey to Caanan finally ended? Only “Joshua” can tell.

Kenya’s mainstream media is these days comically referred to as the “Githeri media”. This is badge of dishonour, coined following what many regarded as the media’s obsession with the trivial, exemplified in its unrelenting coverage of Martin Kimotho also known as the “Githeri man”.

Kimotho was photographed eating githeri, a humble meal of boiled maize and beans, out of a polythene bag while queuing to vote in the 8th August general elections. A voter who took the photograph shared it with friends before it went viral. It was then picked up by mainstream media who turned Kimotho into the unlikely celebrity.

For days across local newspapers and TV stations “Githeri man” became headline news. An overnight celebrity, he was feted by companies as the mainstream media cheered on by giving him extensive coverage. He recently received a Head of State Commendation.

The more serious issues about the highly contested elections, including electoral irregularities and malpractices, were being debated elsewhere – on social media websites, most notably Facebook and Twitter.

The characterisation of Kenya’s mainstream media as the “Githeri media” underscored two important issues, says George Ogola, who studies journalism at the University of Central Lancashire.

“First, it underlined the public’s loss of faith in the mainstream media. The consequence was that many moved to alternative platforms for news,” says Mr Ogola.

“Second, it was a subtle indictment of the media as irredeemably partisan. While boiled maize and beans is a meal enjoyed by many communities across the country, githeri actually indexes a specific community – the Kikuyu. The coded message was that the mainstream media was controlled by – and therefore supported – Uhuru Kenyatta’s government.”

READ: How new media beat main stream media at their own game

Bindu bichenjanga, a Bukusu phrase meaning “things change”, was picked from a piercing song by Luhya musician Amos Barasa. In the song he talks of how situations shift, looking at how Kenya has moved from analogue to digital technology as well as how power and wealth can be fluid.

It was a strong slogan as well to drive the agenda for change and the quest to ‘Caanan’, hoping for a change in political leadership and the general lives of Kenyans. The phrase was popularized by NASA co-principal Musalia Mudavadi, a Luhya of the Maragoli extraction, and soon it was picked up by its leaders, supporters and many other Kenyans. When a bridge that President Kenyatta had just launched in Busia during his campaign collapsed, the phrase “bindu bi-collapsanga” came almost automatically.

This by far remains the most hilarious coinage. It can as well rank as the phrase of the year. Uttered by NASA leader Raila Odinga after the Supreme Court nullified President Uhuru’s re-election on 21st September, “Vifaranga Vya Computer” captured the corrupt IEBC system that managed the elections in which computer-generated results had been used to announce the winner.

Literally translated, it simply means computer-generated chics. The phrase went viral with memes capturing chics with computers flooding social media. Eventually, the so-called “vifaranga vya computer” won the repeat poll still under controversial elections that were boycotted by Raila Odinga. Recently, when online retailer Jumia put up chicken for sale at an offer price of Sh99 during its Black Friday mega sale, Kenyans were quick to poke at it, describing the chicken as “Vifaranga vya Computer.”

This is one term that’s most talked about and has a negative connotation as you will find out shortly. The online urbadictionary.com offers three definitions of slay queen:

1) Young and naive girls who apparently do not date broke men. They spend hours on Snapchat and Instagram showing off things they don’t even own. Nairobi slay queens are the worst, they will milk you dry then run way.

2) Girls who do not have a wealthy background but appear as if they do. They use malicious acts to attain cash, drink expensive alcohol, procure expensive cellphones. But back at home she’s a chicken chaser. You can spot them from a distance by their obnoxious and heavy rolling accent characterized by flat pronunciations of the letter “e”. For example: “I just don’t gat it”; “You batter have my money”.

3) A beautiful but dumb young woman who chases after wealthy men. Nairobi slay queens ride ubers and only drink moet.

Slay Queens prey off of old, promiscuous men for their lifestyle.

In layman’s language, a slay queen is a woman who wants to choke everyone else with how beautiful they feel they are and how they do their “cool stuff”, not forgetting their blond opinions, according to an article in Crazy Monday, a weekly publication of The Standard.

“It is that girl who doesn’t do githeri or fries, does sleepovers only in leafy addresses like Nairobi’s Kileleshwa, Runda and Kitsuru. Dandora na Githurai ni wewe,” writes Nduku Mwema in the article. “Remember that girl who told you that a gentleman must match his shoes and belt, yet her face and neck don’t match? That’s a slay queen.”

READ: Ten steps to date your boss without causing issues

In Kirinyaga and Kiambu counties, women candidates used the name “minji” to galvanise their political bases and woo voters. Kirinyaga governor Anne Waiguru was nicknamed minji, meaning peas, due to her alleged intimate relationship with President Uhuru Kenyatta who many imagined partakes of the peas! President Uhuru appointed her Cabinet Secretary for Devolution in his first term, but she was pushed out by the wave of the National Youth Service Scandal.

Then there was Wiper’s Machakos governor candidate Wavinya Ndeti, also a former MP from the region who mixed up a Swahili prover. Instead of saying Yaliyopita si ndwele, tugange yajayo (let bygones be bygones), she said something incomprehensible:  “Yaliyondwele sipite”. This generated unforgiving social media criticism.

Trust Kenyans to come up with more creative catch phrases in 2018.

SEE: Lost your job? Take these easy steps to get back in the swing