Paralympics athletes protest outside Kencom House in Nairobi on Monday over unpaid allowances.

After spending the entire morning outside the Ministry of Sports offices at Kencom, the Kenyan Paralympics team’s woes still persist. The team had staged a sit-in at Kencom House with the hope of having their laments heard by the committee.

The para-athletes have now marched to State House as they look to have their cries heard at the seat of power. The athletes are lamenting about unpaid allowances having represented the country in Africa Paralympic Championships in Morocco last month.

Unpaid allowances is an evil that has ailed Kenyan sports for ages and even after the president promised to sponsor Sports in the country, it still does. The latest lamenters about this issue are members of the country’s Paralympics team.

When they left the country, the team was supposed to be accompanied by two government representatives who would take care of any of their financial needs but no one representing the government accompanied them to Morocco. Joel Atuti who was to represent the government from the office of the principal secretary for Sports did not show up.

Joe was also expected to travel with another representative from the Sports commissioner’s office who did not also turn up. Before departure to Morocco, things were already working against the athletes’ favour.

Their woes began while they were still in Morocco. The team risked being kicked out of their hotel because of unpaid accommodation fees. The athletes took an initiative to save themselves from being thrown to the streets by contacting Kenya’s ambassador to Morocco, Mr Ali Bejaber. It was Mr Bejaber who came into the athletes’ rescue and contacted the Cabinet secretary for Sports  Amina Mohamed who then sent money for accommodation to the struggling athletes.

This, however, did not bar the paralympians from representing the country to the best of their abilities. They came back to the country bearing 42 medals; 11 Gold, 14 Silver and 11 bronze.
Coming back to the country on the 30th of April, they were received by junior members of the junior officers of the ministry as opposed to other teams who are normally received by senior officers and sometimes even the CS. For a team that had just set a new Paralympics record, they ought to have been given a better reception.

After the reception, the athletes were told to head to their hotel and would receive their allowances on the following day.

On Tuesday, the day they were promised to receive their allowances, Assistant Sports Commissioner Carol Kariuki, told them they will receive the allowances on labour day. The athletes did not see Carol Kariui nor did they receive a single cent and sought to demonstrate at Kasarani with the hopes that their voices might be heard.

They blocked Thika Superhighway while holding peaceful demonstrations. It is then that the Police harassed them in attempts to end the demonstrations. There is footage circulating on social media where Kasarani OCPD Peter Kimani was physically assaulting the demonstrating athletes.

“Kasarani OCPD, Peter Kimani, beat a member of the team to a point where he even bled. We kindly ask that action is taken concerning this matter,” Kenya National Paralympic Committee Secretary-General, Kennedy Ndungi told Business Today while at a sit-in outside Ministry of Sports Offices at Kencom on Monday.

On Saturday, Assistant Sports Commissioner Carol Kariuki approached the athletes with less than half of the owed allowances but they refused to take it. “We are owed more than (Ksh) 100,000 individually and yet we were being offered (Ksh) 7000. We could not accept that because the moment we sign, it will be taken as we have received the entire amount,” Mr Ndungi lamented.

Mr Ndungi added that they were being threatened to take the little money or they would not participate in any other international sports event. They were then told that if they wanted the whole amount, they were to talk to the Sports ministry directly. This is why they decided to sit outside the Ministry offices at Kencom on Monday.

“We have even written to the Deputy President about our complaints and we would like him to act immediately. We do not have a representative with disability in the ministry and we would like to have that addressed as well,” Mr Ndungi said. 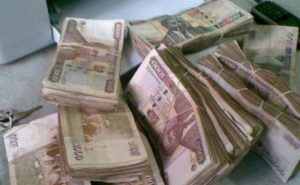