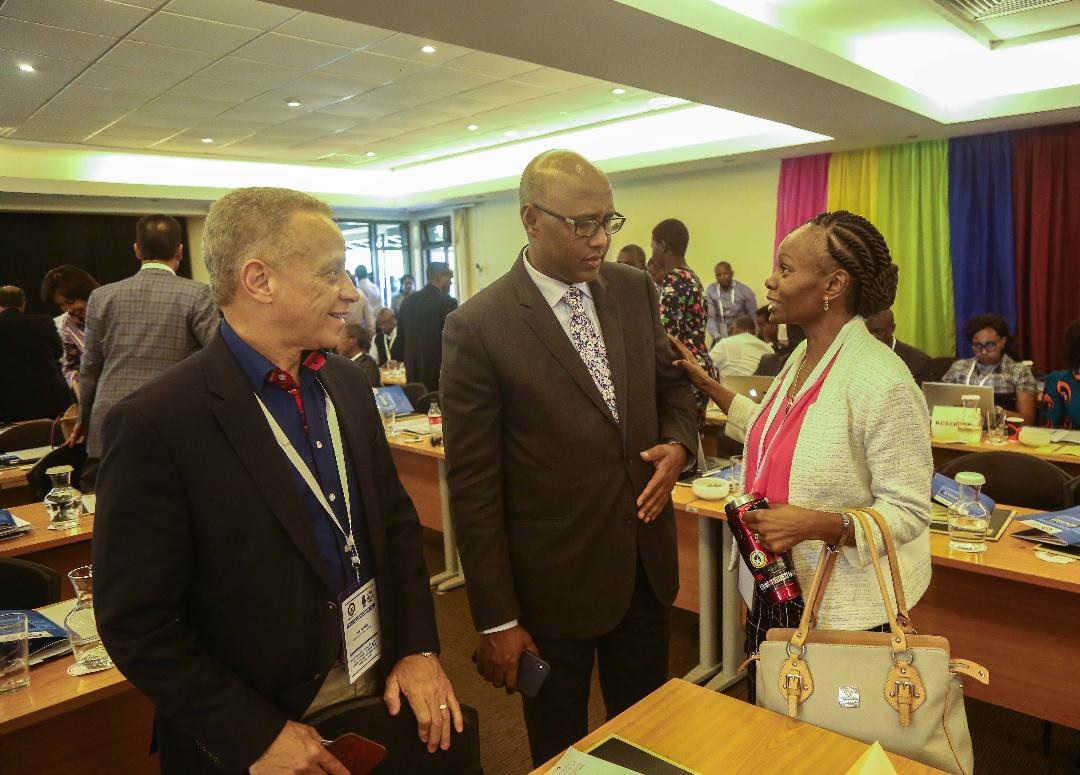 KEPSA Chairman Nick Nesbitt, EAC CS Adan Mohamed and KEPSA CEO Carole Kariuki. KEPSA complains that so many people, for some reason, have the authority to stop a business from running. [Photo/KEPSA]

Excessive bureaucracy and regulations are making it hard for businesses to thrive under the devolved system of government.

The Kenya Private Sector Alliance (KEPSA) has thus urged the Senate to help tackle the challenges slowing down growth of businesses at the county level.

On the Ease of Doing Business Index by the World Bank, Kenya has a good ranking but this is not reflected in the counties.

So many people stopping businesses from running

Officials of Kenya’s private sector say that pending bills by county governments, lack of harmony in policies and the multiplicity of taxes are among the issues facing the private sector in the counties.

Nesbitt said Small and Medium Enterprises have been particularly troubled by having to deal with too many regulators, who end up stifling business.

“So many people, for some reason, have the authority to stop a business from running,” said Nesbitt.

KEPSA CEO Carole Kariuki said the net effect of the many rules and unpredictable policies in the country is the lack of competitiveness. This, she said, results in international investors choosing to set up businesses in other countries.

“While the local is important, the global should be a focus,” she added.

Kariuki urged the Senate to come up with a framework that is predictable so that companies doing business with counties know the start to finish timelines. On the other hand, counties should go for services and goods they can pay for.

“We need the Senate to create a framework that enables predictability in terms of payments,” added Kariuki.

Senate Speaker Kenneth Lusaka said, “We have a problem and we must confront the problem so that we find a solution. One of the issues that has been raised, even by ambassadors, is the bureaucracy. We must make officials accessible. The world is becoming increasingly competitive and unless we make ours competitive, people are going to take their investment elsewhere.”

He said with more Kenyans moving to urban centres, county governments need to come up with plans that attract investors to set up industries outside Nairobi.

“As we deliberate on various economic issues affecting us as a country, we must now change our focus both as a business and as individual citizens from the perspective of gain to a wider concern for the societal good,” he added.

Lusaka acknowledged that the threat of job cuts is real and capital flight while small businesses have no access to credit and the economic drivers are grinding to a halt.

The Senate has made it easier to do business in Kenya through the enactment of four new laws: Assumption to the Office of the County Governor Act, 2018, Urban Areas and Cities (Amendment) Act, The Physical and Land Use Planning Act, 2019, and the Irrigation Act and the Warehouse Receipts System Act.

Kariuki said the Assumption to the Office of the County Governor Act, 2018 would ensure pending bills are paid while the changes to the Urban Areas and Cities Act would provide an opportunity for private sector participation in the development decisions in the counties.

The Physical and Land Use Planning Act provides a legal framework to curb unplanned development while the Irrigation Act and the Warehouse Receipts System Act provide opportunities for private sector participation in development decisions in the counties.

Kariuki said the Senate and the private sector would need to work together to translate the projected 5.6 per cent growth in Gross Domestic Product to not only be infrastructure-led but also through production by Manufacturing, Agriculture, among others, and trickle down to the public is only achieved when government especially focuses on affordable health, public transport, affordable food, affordable access to credit and housing.

The Speaker’s Roundtable is expected to conclude with resolutions on a number of measures that both KEPSA and the Senate will undertake to improve the business environment in the country and the other country development initiatives.

Read >> Uhuru Throws Kenyans in the Sea of Banking Sharks

In an attempt to seize new markets and get ahead of competition, rapid expansion fueled by high levels of debt has proved to be a very questionable strategy as these businesses now struggle with their working capita

The courts had on the morning of Friday, January 15 rejected activist Okiya Omtatah’s application to stop the exercise, about an hour before it began.

Kivaluka informed members of staff that the company would be slashing employee salaries by between 5 percent and 30 percent for employees earning Ksh45,000 and above