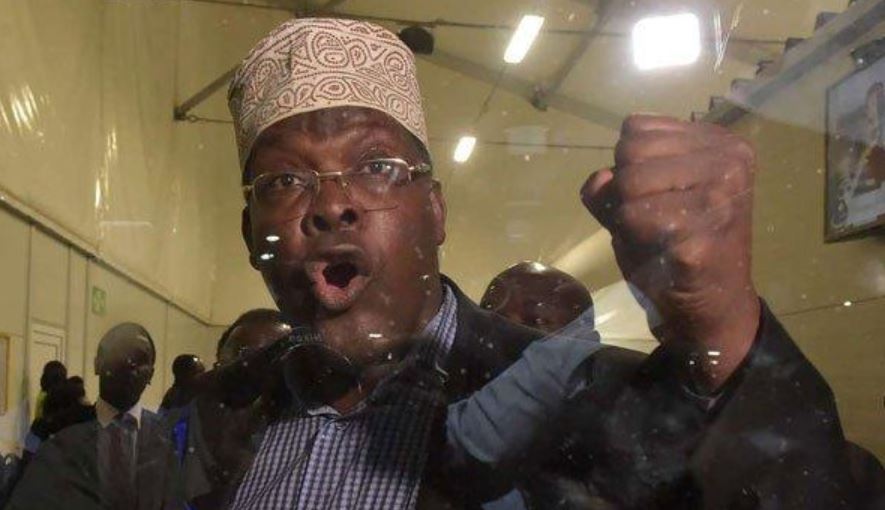 Miguna Miguna has been barred from flying to Kenya or any other African country. Photo/ Nairobi Wire

A multitude of Kenyans was expecting the return of controversial lawyer Miguna Miguna who was set to land in Kenya on Tuesday 7th January 2020.

However, on Tuesday morning the lawyer revealed that he could not fly to Kenya because he had been barred from boarding a Lufthansa flight from Frankfurt, Germany. This would mean that Miguna’s long-awaited return could not happen just yet.

Speaking to Hot96FM via phone on Tuesday morning, Miguna claimed that Lufthansa air had received a red-alert that prevents them from flying him to Kenya or any other African country.

The lawyer claimed that Kenyan security had blocked him from entering the country. He further claimed that Lufthansa Air said he would only be allowed to board the flight if the Kenyan Government sends an official notification cancelling the alert.

“Lufthansa flight manager is saying that the Government of Kenya must send an official communication to Lufthansa at Frankfurt office before I can be allowed to fly to Kenya or any other African country,” Miguna added.

If everything would have gone as planned Miguna would have departed from Germany at 11.20 am and arrive in Nairobi at 9.25 pm.

Miguna blamed the Immigration Department saying it swindled the Kenyan press through a ‘damage control statement’ in which the department had promised to execute the court order.

“I forewarned everyone yesterday not to believe the obvious damage control press statement, yesterday. Its aim was just to distract the gullible Kenyan media from reporting the contents of Justice Korir’s court orders that issued yesterday,” he said.

Government Spokesman Rtd. Col. Cyrus Oguna had earlier said that Miguna is free to travel to Kenya on assurance from President Uhuru Kenyatta. A report from the Daily Nation on Tuesday morning quoted the Spokesman saying the Foreign Affairs Ministry ‘will deal with the red alert’.

The High Court had ordered that the Immigration facilitates Miguna’s unconditional return to Kenya after deeming his  2018 deportation unlawful.

[Read Also >> Miguna Returns: The Drama-Filled Life of Lawyer Who Takes no Prisoners]

Miguna, who had vied for the Nairobi gubernatorial seat unsuccessfully, has been deported twice from Kenya. He was first deported on February 7, 2018, and deported again on March 29, 2018, after attempting to get back into the country.

During his deportation, Miguna spent 72 hours detained at the JKIA before he was carted off to Dubai and later Canada where he is a Citizen.

He landed in this trouble shortly after he swore in Raila Odinga as the ‘people’s president’ at a rally in Uhuru Park.

Faced with a cash crisis, it is understood Standard is struggling to pay sacked employees their dues.