An article published on 14th October by Bizna Kenya website claiming that Kenya was unable to issue new passports due to a printer breakdown is misleading. According to the article, Kenyans who submitted their biometrics to the Directorate of Immigration Services had waited for months to receive their passports since the printer had broken down a few weeks before.

“All passports in Kenya are produced in Nairobi. The printing machine has broken down and there is nothing we can do,” Bizna Kenya reported, quoting “a source” at the Directorate Immigration, adding that the breakdown was reflected by multiple complaints from Kenyans who had been waiting for their passports in vain. 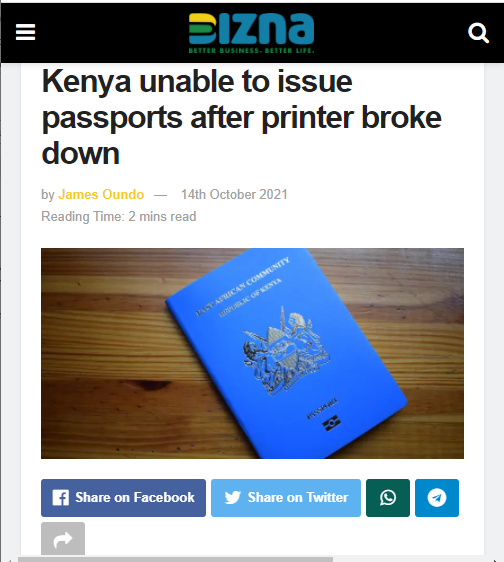 A fact-check by Business Today revealed, however, that the article was not accurate. On Thursday, 14th October, the Department of Immigration Services (DIS) tweeted that passport printing was ongoing, although at reduced capacity because one printer was being serviced.

“Printing of passports is ongoing though at a reduced capacity as one printer is undergoing servicing. It will be operational on Monday 18th October 2021. Reports on social media stating otherwise are untrue and should be ignored,” the Department of Immigration said through its Twitter account.

A search online for news about the passport printer breakdown did not yield any reports except the report published by Bizna Kenya and another news article dismissing it based on the DIS statement.

>> Alfred Mutua And Ex-Wife Battle For Hotel Shares After Fallout

Kenya is currently shifting to new generation passports. In February 2021, Interior Cabinet Secretary Fred Matiang’i extended the migration to second generation passports deadline to December 31, 2021. It takes at least two weeks for first-time applicants to get their passport once they have physically submitted application forms at the Immigration offices.

VERDICT: The article stating that Kenya had stopped printing passports after the printer broke down is MISLEADING as the Department of Immigration clarified that printing was going on as the printer was being serviced.