Rising rental trends in Nairobi are forcing tenants out. Those working in Nairobi are preferring to live outside the capital due to financial constraints. [Photo/Kiambu Rentals]

If you want to make it in Nairobi, you have to choose a struggle and make sure you win at it.

For instance, there are many people who believe that ‘Nairobi si ya mama ya mtu’ and while it make sense for those who say it, the truth is that Kenya’s capital is the land of milk and honey if you find your niche.

To make life work out for you in Nairobi, the reality is that there are many demands and they have to be met. Whichever way one makes this happen, the end justifies the means, right?

With such sentiments, you find cons and those who fake it till they make while a few make it honestly.  But the biggest battle usually is finding a house that one can comfortably pay for and avoiding the drama with landlords every end month.

And to make this a reality, hardworking Kenyans make do with what they have and with sky-high rents, Nairobi becomes hostile to those without deep pockets.

A report released in October last year by Ritz Housing and Properties Limited seemed to confirm many released by other housing companies showing that those working in Nairobi were preferring to live outside the capital due to financial constraints.

The report indicated that major towns in the outskirts of Nairobi City were continually experiencing a rising rental trend, recording an average rental increase of 2.1% on the lower side and up to 26.5% on higher side, between quarter three of 2018 and same quarter in 2019.

One bedroom to three bedroomed units in Thika, Ruiru, Ongata Rongai, Ruaka and Kitengela were the focus of the report.

According to Samuel Mathenge, the company’s Managing Director, the factors making the satellite towns attractive include high walkability score, good access to public transport and the high number of open businesses.

In Kitengela, the monthly median rental price for a one-bedroomed house stood at Ksh15,000 an increase of 8.45%  between the third quarter of 2018 and 2019. The monthly cost of the two-bedroom house stood at approximately Ksh25,000 an increase of 10%  while three-bedroom house cost went up by approximately 5.40%  to an average monthly median rental price of Ksh39,000.

“The rise in population requires an increase in housing thus growth of the rental market in Kitengela,” he added.

In Ongata Rongai, the monthly mean price of a one-bedroom rental stood at Ksh9,500. This was an increase of 2.15% between quarter three of 2018 quarter and same quarter 2019.

For a Two-bedroom house, the mean monthly rental price was approximately Ksh22,000 a 4.56%  increase, while a three-bedroom house rent stood at Ksh35,000, a 2.941%  increase compared to the same quarter previous year.

For two-bedroom units, prices stood at approximately Ksh18,000 which was an increase of 5.88%  compared to the previous quarter of 2018.

On the other hand, the three-bedroom rent stood at approximately Ksh30,000, an increase of 15.38%  compared to the previous quarter.

In Ruaka, where the monthly mean price of a one-bedroom rental stood at Ksh24,000 which was an increase of 10.0%  between the third quarter of 2018 and 2019. In two-bedroom rentals in Ruaka, the mean monthly rental price stood at approximately Ksh34,000. This was an increase in 5% compared to the previous quarter.

The three-bedroom houses rentals, on the other hand, stood at Ksh48,000 which was an increase of 2.13%  compared to the previous quarter.

With these rents, only a few Kenyans can afford to pay meaning that many more are forced into informal settlements if they have to continue making a living in the city.

Kariuki Waweru, one of the about 650 registered valuers in Kenya opines that Kenya’s real estate sector is highly segmented. On the sector’s collapse, he says it is still far off from experiencing a burst since many people are yet to be comfortably housed.

“Some places like Kilimani and Kileleshwa have already experienced a bubble. There is a time when if you built apartments the rents were good and it was easy to sell them off-plan. People were making very good returns,” says Kariuki.

He adds, “The bubble bursts in different places but the general picture is that in Kenya the bubble is not going burst. However, some sub-markets have already experienced the bubble burst and they are struggling.”

Kariuki states that a bubble bursts when one buys an overpriced property which they cannot later sell unless they have to dispose of it at a lower price.

“The Kenyan market is interesting in that some sub-markets are thriving more than others making the real estate a lucrative sector to invest in-still,” he adds.

He adds that Kenya is a bit stable for certain segments mostly for properties priced below KSh10m.  He reveals that the stability is even better where pricing is under KSh5 million.

“It is hard to achieve such pricing if the government is not giving subsidies or if the properties are not located too far from Nairobi. But the number of people able to access financing of less than KSh5 million is higher than those who can access KShs10 million,” he cautions. 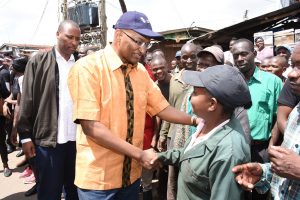