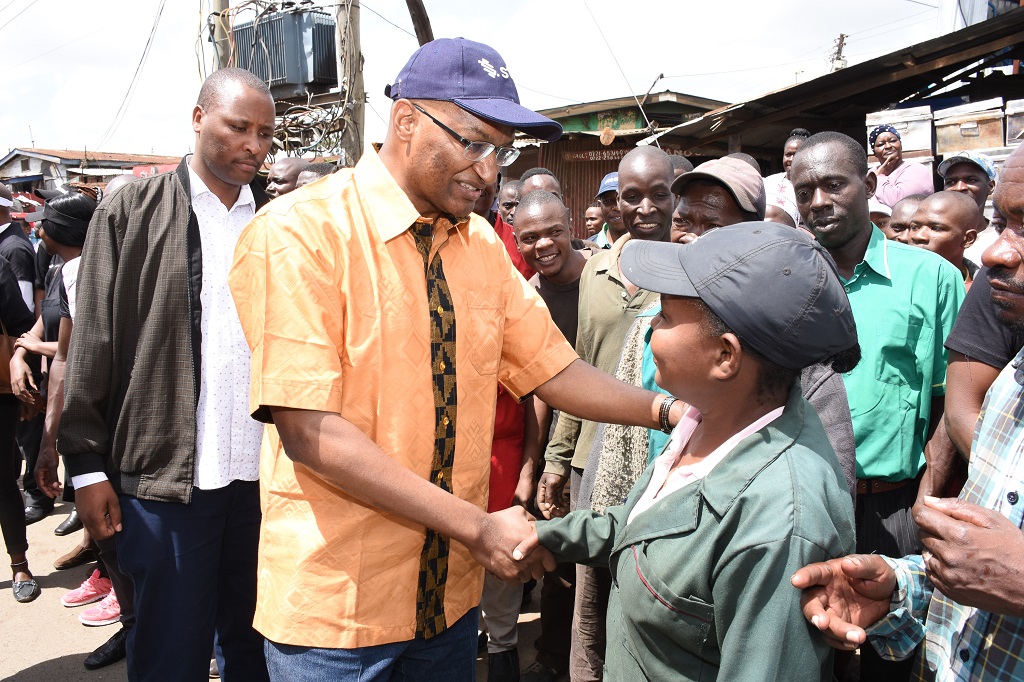 CBK Governor Dr Patrick Njoroge with traders at Gikomba market. The sector is grappling with bottlenecks that are choking its growth. [Photo/Stawi]

Micro and small enterprises are a huge contributor to the country’s economy, especially in the manufacturing sector.

Despite this, the sector is grappling with bottlenecks that are choking its growth.

Some of the reasons why the sector is struggling to thrive are lack of capital and government laxity in empowering small businesses through retrogressive laws and unitive taxation.

According to the World Bank, Micro and Small Enterprises (MSEs) which are key drivers of the economy face difficulties in improving their productivity due to poor managerial practices and information failures around how to upgrade.

In addition, most small businesses are run without mentorship which is key for those who aspire to make it in business. The lack of mentors comes about because of lack of willingness by those who have made it in business to empower those below them.

Kenya, according to the World Bank, also has limited contact between traditional industry and tech-enabled start-ups. This is a missed opportunity for both sides wiping out gains or stunting growth brought about by reinventing the wheel.

“Kenya’s other challenge includes limited connections to networks of international mentors, angel investors, and venture capitalists all of which make it difficult for local start-ups and SMEs to grow and compete internationally.

For Kenyan women entrepreneurs, particularly those who own start-ups and SMEs; all these challenges are even more pronounced,” The statement adds.

Start-up driven innovation is key for economic development as it creates new jobs for the growing youth demographic. This gives hope to the sector which has been stymied by the above challenges.

By strengthening technology incubators and accelerators, the Kenyan SME sector can only thrive.

In addition, lenders have now started courting SMEs with the Standard Chartered Bank injecting KSh6.3 billion in direct and indirect lending to SMEs in 9 months to September 2019.

The funds supported more than 8,000 such enterprises in the process, the Bank’s Chief Executive Officer, Kariuki Ngari has said.

According to Ngari, the bank is conscious of the importance of SMEs to the economy and has strengthened its business model to cater to the small businesses that contribute immensely to the country’s Gross Domestic Product (GDP).

“This reiterates our commitment towards supporting lending to the private sector, particularly the Small and Medium Enterprise sector despite the prevailing capped interest rate regime,” said Ngari in a dispatch to newsrooms.”

He added that the bank appreciates the key role played by the SME sector play in sustained growth of the Kenyan economy and we like to restate our commitment to supporting the SME, and the private sector in general.

Ngari welcomed parliament’s decision to repeal the cap on interest rates saying the law had stifled credit growth to SMEs.

“The repeal of the interest rate cap is a step in the right direction as it allows market forces to determine interest rates and to price risk appropriately,” said Ngari.

Read >> Why Indians are the Most Successful Business Community in Kenya

The company’s chief executive officer Rawlings Otini said Zuru has signed up more than 100 car owners and is aiming to increase transparency.

Lendable is a fintech startup which provides structured finance to alterative lenders in frontier and emerging markets.

Learning to deal with work stress is critical because it can be hard to do well otherwise. Luckily, coping with it is easier than ever.