Jumia appears to be generating more flak than value from its listing on the NYSE through a successful IPO, which earned it the name the “Amazon of Africa” in Western media.  Just a month after listing, and days after an investment research firm blew the whistle on ‘fraud’ at the e-commerce company, a class action lawsuit has been filed on behalf of purchasers of the Jumia American Depository Shares (ADSs) who acquired the stock between April 12, 2019 and May 9, 2019.

Through Robbins Geller Rudman & Dowd LLP, the investors on May 14th filed the lawsuit in United States District Court Southern District of New York. The lawsuit is based on the damning Citron Research which alleged that Jumia had failed to state in its Form F-1 filing that 41% of its orders were not honoured – they were returned, not delivered or cancelled.

The lawsuit says that the statements made by the company were ‘materially false and misleading’ when they were made since they ‘failed to disclose the following adverse facts:

“In 18 years of publishing, Citron has never seen such an obvious fraud as Jumia,” Citron analysts said in heir report. “As the media in the US is naively anointing Jumia as the ‘Amazon of Africa’, the media in its home country of Nigeria has plethora of articles discussing the widespread fraud in this Nigerian company. Not even that elusive Nigerian prince can cover this one up.”

Jumia has stood by its prospectus. Sacha Poignonnec, Jumia CEO, was quoted by The Wall Street Journal saying the company is “transparent” and declined to respond directly to the claims made in the Citron report. “We don’t necessarily want to feed those types of organizations or people,” he said. 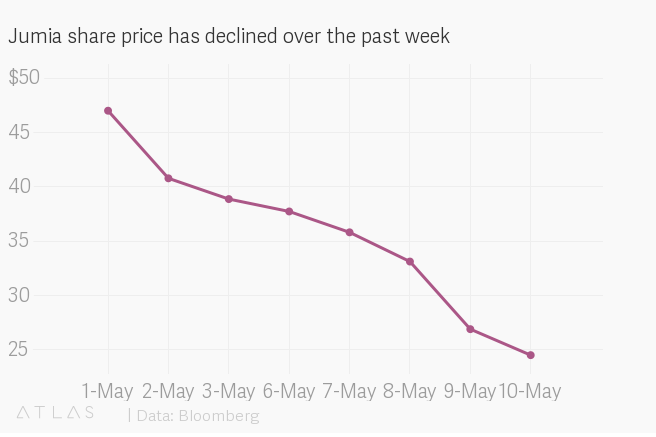 According to Jumia’s Registration Statement, the company’s operations are conducted in six regions in Africa, which consist of 14 countries that, together, accounted for 72% of Africa’s 2018 Gross Domestic Product. The Registration Statement states Jumia intends to benefit from the expected growth of e-commerce in Africa through the investments and local expertise the company developed since its founding in 2012.

The company touted strong year-on-year growth in gross merchandise volume (GMV) growth (58%) to €240 million ($270 million). GMV is non-standard accounting metric Jumia uses to show “the total value of orders including shipping fees, value added tax, and before deductions of any discounts or vouchers, irrespective of cancellations or returns.”

“The Registration Statement issued in connection with the IPO was materially false and misleading and failed to disclose material facts necessary in order to make the statements made, in light of the circumstances under which they were made, not misleading,” the attorneys state in the lawsuit. “These materially false and misleading statements and omissions remained alive and uncorrected during the Class Period.”

The suits argues that the material misstatements and omissions created in the market “an unrealistically positive assessment of Jumia.

The The lawsuit says the management materially misled the investing public, thereby inflating the price of Jumia shares, by publicly issuing false and misleading statements and omitting to disclose material facts.

“At all relevant times, the material misrepresentations and omissions particularized in this Complaint directly or proximately caused, or were a substantial contributing cause of, the damages sustained by Plaintiff and other members of the Class,” it says.

The suits argues that the material misstatements and omissions created in the market “an unrealistically positive assessment of Jumia, its business, financial reporting, services, and financial prospects” thus causing the company’s shares to be overvalued and artificially inflated.

[ NEXT: Insider trader who made hundreds of millions fined Ksh208 million ]