Jumia banner when it announced entry into the NYSE. The company has closed its Rwandan operation. Photo/ Business Today- File

Jumia Technologies is yet to respond to allegations of its “worthless equity” that were claimed in a report by online investment newsletter Citron Research.

The allegations, reported scathingly by Citron, led to the stock of Jumia on the New York Stock Exchange (NYSE) to plunge nearly 15% on Thursday afternoon to around USD28.30(Ksh2,860), according to various American markets sites.

Having performed well at the NYSE since its listing on April 12, the Citron report comes as a blow to Jumia who have already endured questions over its ownership. While branded as an pan-African e-commerce firm, queries have arisen as to its top leadership, ownership and developers not being from the continent.

Citron alleged that in its 18 years of publishing, it had never seen such an obvious fraud as Jumia.

“As the media in the US is naively anointing Jumia the “Amazon of Africa”, the media in its home country of Nigeria has a plethora of articles discussing the widespread fraud in this Nigerian company,” the report reads.

While relying heavily on news articles from Nigeria as well as a supposed confidential investor presentation, Citron goes on to say that Jumia fumbled with their numbers while filing to list at the NYSE.

“Jumia inflated its active consumers and active merchants figures by 20-30%,” the online investment newsletter goes on to claim.

[Read: Word of the Day: Bulls and bears]

According to the report, one of the most disturbing disclosure that Jumia removed was that 41% of orders were returned, not delivered, or cancelled. This, according to Citron, was previously disclosed in the Company’s October 2018 confidential investor presentation.

Citron also alleges that fraudulent activities have been carried out by some of Jumia’s executives, including relatives of those in senior management.

It concluded, “This is the most expensive US listed e-commerce company with an unviable business.”

The online investment newsletter that was started in 2001 is run by American activist Andrew Left and publishes reports on firms that he claims are overvalued or are engaged in fraud, especially those trading in the US.

Jumia Technologies listed at the NYSE in mid April, doing so as the business model is better understood at the New York bourse, according to Jumia Kenya Managing Director Sam Chapatte.

“We decided to go through New York because that is where the best understanding of the investor side is about our business model,” he said in April. “That’s why you see many other global tech companies list in New York as well.”

After a day of listing, its stock had soared 75%.

In the month of April, Jumia transacted a total volume of 77.4 million shares on the NYSE. Its stock price also rose more than double from the initial offering.

[See Also: How your data bundles are gobbled up to make advertisers richer] 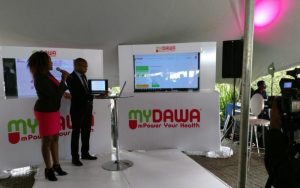