Principal secretary for the Ministry of Housing and Urban Development, Charles Hinga, at the handing over ceremony of the Alma. Photo/ Linnah Talia

Housing and Urban Development Principal Secretary Charles Hinga says the ministry is focusing on promoting local production as it seeks to attain the goal of affordable housing.

Speaking at the handing over ceremony of Cytonn Real Estate’s The Alma, he took the opportunity to address the issues that face the ministry of National Housing and Urban development, and rumours that he said have been going around about the government only employing the Chinese to work on Kenyan housing projects without inclusion of local products.

the PS said that the Ministry’s main focus has been to promote local production by purchasing different house items from them. He noted that there are 67 house hold items that can be supplied by Kenyan Small and Medium Enterprises (SMEs).

“So far we have provided jobs through the National Housing Projects, 8500 doors used on the Parkroad Real Estate Housing project that cost us ksh122 million was from local Jua kali vendors,” he said.

Mr Hinga also used the opportunity to talk of the progress of the Parkroad Real Estate Housing Project that had earlier been launched in February. He said that the project will be handed over in the month of September openly. The project has about 228 units in it as it awaits handing over.

He mentioned that enabling local real estate investors to bring their dreams to reality is made possible by supporting their housing projects. He added saying that the government has envisioned for its citizens for affordable housing that can be faster be fulfilled.

The PS was speaking at the Alma handing over event which was also graced by other top politicians. Rt Hon Raila Odinga and Kiambu governor Ferdinand Waititu were present at the event which was held on Thursday 18th July 2019.

Rt Hon. Raila Odinga officially handed over the keys to buyers of Cytonn Real Estate’s The Alma Phase 1. The Alma, a residential development in the rapidly growing Ruaka town, cost a total of Ksh 4.5 billion. All units of have already been sold.

“It gives me immense pleasure to be part of the Alma Phase 1 handover ceremony by Cytonn Real Estate,” Mr Hinga commented, “the Government and all subsequent players must dedicate adequate resources to building more and more homes.  We can fulfill this obligation even faster if the economy grows. This means Government having to encourage private sector growth.”

Linnah Taliah is a journalism student at St Paul’s University. She is on attachment at Business Today. 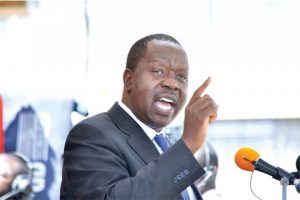