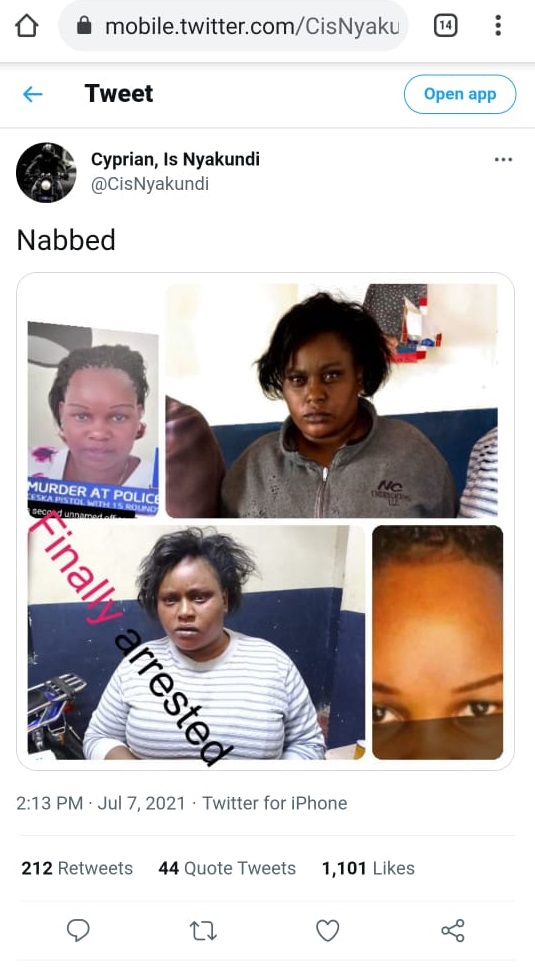 On 5th July 2021, as police intensified the hunt of Corporal Caroline Kangogo, on the run after being linked the murder of two men, controversial blogger Cyprian Nyakundi, announced that the fugitive police officer had been arrested.

Breaking the news on Twitter, the post was widely read and retweeted over 200 times. A fact-check by Business Today has established that Caroline Kangogo, whose run ended tragically in suicide on 16th July, was never arrested by the police during her run.

Corporal Caroline Kangogo was being sought over the murder of her colleague Constable John Ogweno and businessman Peter Njiru Ndwiga. On 6th July, the DCI declared Kangogo a person of interest and began a search for her, declaring her “armed and lethal”.

Even after blogger Cyprian Nyakundi shared the information of her alleged arrest, police were still issuing updates on her run, meaning she was still at large.

Police authorities announced on 16th July that Ms Kangongo shot herself dead in her mother’s bathroom at her parents’ Elgeyo Marakwet home. The death ended a two-week hunt for the police officer who evaded an elite unit crafted by the Directorate of Criminal Investigation.

The social media post on 7th July that she had been arrested was thus FAKE news as police authorities had not recorded any arrest of the now deceased police officer.

Next >> From Kencell to…Airtel? That Can Be a Tricky Question