Central Bank of Kenya (CBK) Governor Patrick Njoroge has dismissed claims by the International Monetary Fund (IMF) that the Kenya shilling is overvalued by 17.5%, saying the apex lender only intervenes in the foreign-exchange market to minimise volatility. Instead, he said the shilling could be overvalued by less than 5% against the dollar.

Speaking to reporters in Nairobi a day after the Monetary Policy Committee retained the Central Bank Rate at 9.0%, Njoroge said the IMF used a new methodology that has only been in place since 2015 to reach that conclusion. The formula has been used on advanced economies and only now being applied to emerging markets despite its “well-known” weaknesses, he said.

“We are being used as a guinea pig on the External Balance Assessment-Light methodology,” Bloomberg quotes Njoroge as saying. “The methodology was used in a black box method, which we cannot accept.”

He said Kenya uses “standard approaches” such as the Purchasing Power Parity, Elasticities, Real Equilibrium Exchange Rate because one methodology is not sufficient to give a holistic picture.

“Our own calculations support the view that there is no fundamental misalignment reflected in our exchange rate and the shilling reflects the real and true value,” Njoroge said. “We have a flexible exchange-rate regime and we don’t have a view on the level and direction of movement.”

Last monnth, an IMF report on Kenya’s economic health said the shilling risked being classified as “managed” rather than operating on the forces of demand and supply.

“Reflecting limited movement of the shilling relative to the US dollar, MCM’s (Monetary and Capital Markets Department) 2018 report on exchange rate arrangement to be published in February 2018 will reclassify Kenya’s shilling from floating to other managed arrangement,” said IMF. 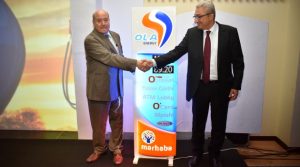 Libya Oil Kenya rebrands to OLA Energy
In Kenya, the new brand will be initially introduced in…