A Facebook post with a statement claiming that the BBI Secretariat would appeal the C*************l decision by moving to the Supreme Court is fake as it has been disowned by its alleged author. The two-page statement was published on 24th August on the Facebook page Campaign254 with the name of Suna East MP, Junet Mohamed, as the issuer.

The statement claims the secretariat was unhappy with the decision of the C*************l, which threw out an appeal by backers of the BBI to revive the initiative. It lists five key points of its appeal, saying “we are confident the Supreme Court will set the record straight on the matters that we raise.”

A fact-check by Business Today revealed that the statement was fake as it was not officially released by the BBI Steering Committee. Indeed, Mr Junet Mohamed, the head of the BBI steering committee, dismissed the statement on Twitter, urging Kenyans to disregard it. “Ignore this document circulating purportedly authored by myself. It is FAKE,” he said through his Twitter account the same day. 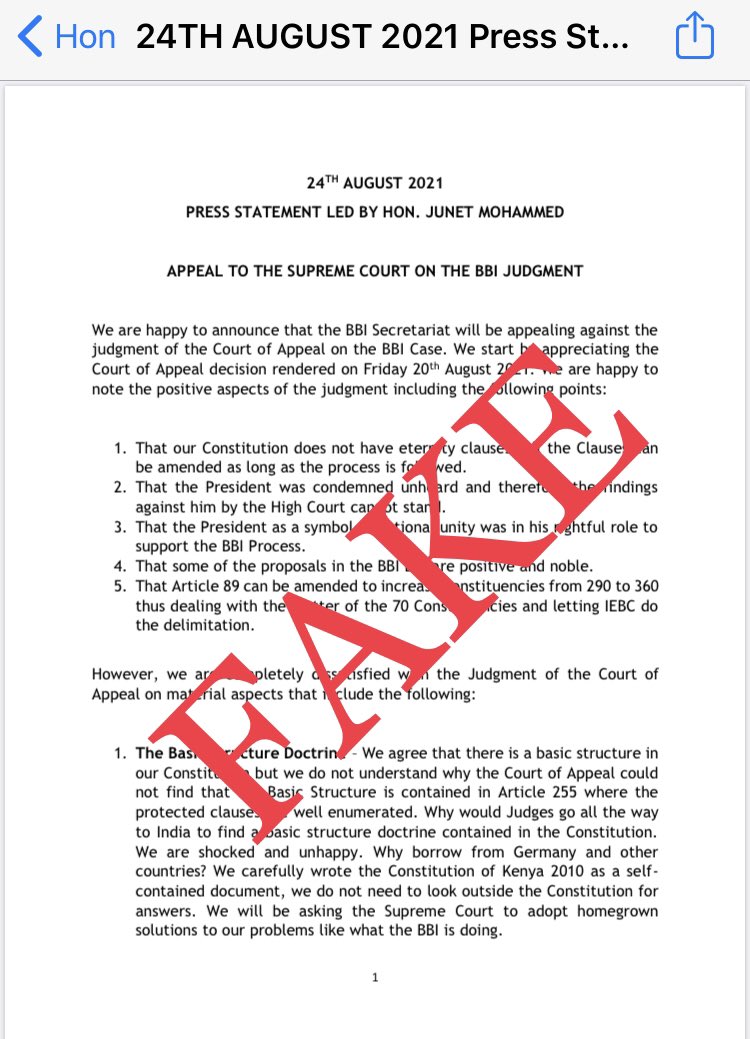 It is the Attorney General, Mr Kihara Kariuki, who on 3rd September,  filed an appeal at the Supreme Court challenging the decision by the Appellate court to affirm nullification of BBI.

Meanwhile, the statement published by Campaign254 Kenya is not signed as is the norm and has typos, where for instance the title reads “Press Statement Led by Hon. June Mohamed” instead of “Read” – which put its authenticity in doubt.

VERDICT: A statement published on Facebook stating the BBI secretariat will move to the Supreme Court to challenge the C*************l ruling on BBI is fake as it has been disowned by the BBI steering committee.

>> Citizen TV’s Victoria Rubadiri On Her Way Out?