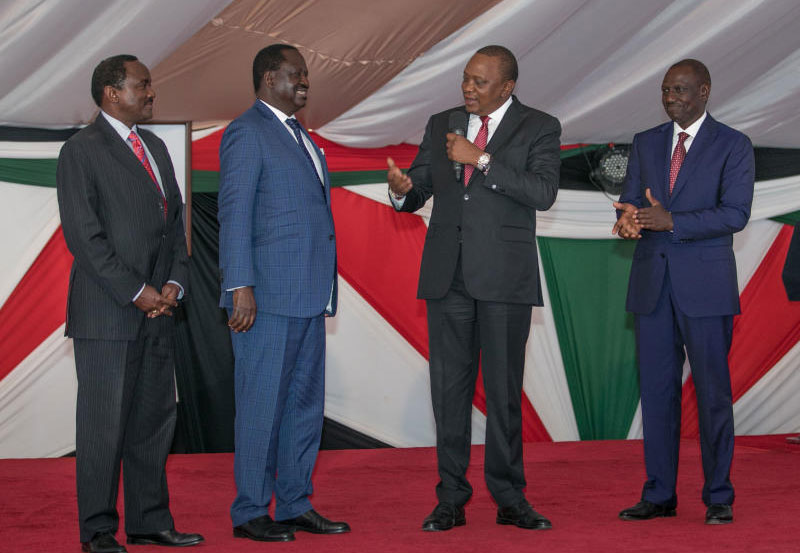 Kenya's top political leaders; From right Deputy President William Ruto, President Uhuru Kenyatta, ODM Leader Raila odinga and Wiper Leader Kalonzo Musyoka during the National Prayer Breakfast at Safari Park Hotel earlier this year. They are the main players in the advocacy in the calls for a referendum.

As would be expected, political leaders from big tribes in Kenya were the first to protest the 2019 Census results released by the Kenya National Bureau of Statistics (KNBS) owing to the resource allocation and political ramifications that the statistics bode for this country.

Census results are also key as the Independent Electoral and Boundaries Commission (IEBC) relies on this data to draw boundaries while the Commission on Revenue Allocation (CRA) uses the data to allocate revenue to the counties.

Meru Governor counterpart Kiraitu Murungi and his Tharaka Nithi counterpart Muthomi Njuki were the first to voice their concerns with the results. Traditionally, Meru and Tharaka Nithi are strongholds of presidential candidates from Central Kenya and politicians from the vote-rich region use that as a bargaining tool to advance their political interests.

“We even alerted the county commissioner who wrote to KNBS. We were told the mistake would be rectified so we cannot accept the 1.5 million as the actual population of Meru County. If they don’t correct it we will go to court,” Mr. Murungi said.

Njuki also threatened to move to court to challenge the “bogus” results.

Nyeri Governor Mutahi Kahiga also disputed the results terming them inaccurate but gave KNBS the benefit of the doubt saying that the results were “more accurate” than the “doctored” 2009 census results.

“Our minds are still fresh with the manipulation that occurred then,” said the Governor.

Read: What Does Atwoli Know About 2022 Succession That Kenyans Don’t?

Politicians from Central Kenya have in the last six years faulted the formula used by CRA to allocate funds to the counties saying that some “small” counties were receiving more money than they ought to.

The results may also affect the future of Lamu County especially if the Building Bridges Initiative (BBI) recommends the merging of some counties. Lamu is home to only 143,930 people.

The census results have a direct impact on the outcome of the 2022 presidential election hence the push and shove by politicians.

Analysis of the census results by Business Today shows that Jubilee strongholds including Central Kenya (8.1 million), North Eastern (3.2 million) and Rift Valley (8.7 million) have a population of 20, 134, 397.

The census results are likely to worry a potential presidential candidate from Central Kenya. Despite the popular misconception that Tharaka Nithi has a massive population, the area has a small population of 393,177, the fourth-lowest in the country.

There are various factors to consider in an election, for instance, Jubilee made inroads in Kisii and Nyamira in the 2017 presidential poll as well as the repeat presidential poll but if an election were held today based on these numbers, the election would go down to the wire, possibly into a re-run where the candidate with the overall majority would win

The BBI taskforce is expected to hand its report to President Kenyatta and Raila imminently, its recommendations may have far-reaching implications on the 2022 election and the system of political governance.

Census results released on Monday are central to political and economic planning heading to 2022.