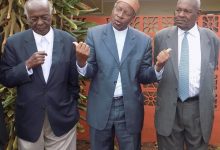 Leaders from Mt Kenya region have asked men in Central Kenya to embrace polygamy to reverse the dwindling population in the region.

Led by the Chairman of the Nyumba Kumi security initiative, Mr.Joseph Kaguthi, the leaders said those capable of supporting polygamous families should do so to prevent the population in central Kenya from declining.

Speaking during a Nyumba Kumi initiative for lay leaders from Mt Kenya region in Embu town yesterday, Kaguthi said death rates in the region are higher than birth rates and asked women ‘not to be mean to men’ and give birth to many children.

He said polygamy was practiced by the traditional Kikuyu community, adding that nothing is unbiblical about the practice and it should be embraced in modern Kenya.

“The clergy is the only prohibited from practising polygamy. There is nothing evil with polygamy. A study done has shown that 44 percent of families in Mt Kenya region are headed by single parents. Also, majority of inmates are from single parents. Polygamy can address this,” he said.

Kaguthi called on Councils of Elders in the Mt. Kenya region to standardize bride price rates to encourage young people to get married.

He said the hard stance taken by parents, and the high rate they charge as bride price, scares away men, leading to a high number of single families in the area.

His sentiments were echoed by the Njuri Ncheke Secretary General Phares Rutere who said polygamy should be practiced by those financially stable.

READ: Blue Whale game that the government has banned

The leaders attributed the dwindling Mt Kenya population to illicit brews that make men impotent, blaming it on certain leaders who support the consumption of illicit brews in the area.

Gema Chairman Lawi Imathiu called for the continued crackdown on illicit brews in the region, saying in the modern Kikuyu community, men are not spending enough time with their wives.