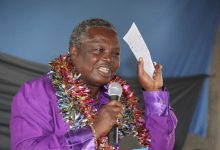 His job description is straight forward and he is supposed to be the first line of defence for Kenyan workers.

COTU Secretary General Francis Atwoli’s job more often than not involves hassling the government but it seems the political capital he has garnered over the years has allowed him access to privileged information.

On Wednesday, Atwoli, speaking during the JKL show on Citizen TV put his foot on the pedal in his sustained campaign against Deputy President William Ruto’s 2022 State House bid, effectively dismissing the country’s second in command’s bid as a ‘wild dream’.

“I have already told you before that come 2022, the current number 2 (Ruto) will not be president. If I were him, I would not waste even a single cent campaigning because that is not going to happen,” said Atwoli.

However, this is not the first time that the career trade unionist is making comments that seem to suggest he gets his information from people at or near the refinery.

Uhuru “too young” to Retire

During Labour Day celebrations in May 2018, Atwoli courted the public’s criticism when he intimated that President Uhuru Kenyatta is “too young” to retire in 2022 and hence a position ought to be created for him in the next government.

President Kenyatta is currently 55 years old and will be 59 when he exits the scene in 2022.

“Let us amend this Constitution and adopt the Bomas draft to fight exclusion, realising that not all of us can be president. This will allow us to accommodate President Uhuru Kenyatta, who is very young. Otherwise, where are we going to take him?” posed Atwoli.

Read: Atwoli Sacked from NBK Board as KCB Streamlines Operations

“I told you three years ago that a referendum is coming. Forget Ekuru Aukot’s Punguza Mizigo draft. We must wait for the Building Bridges Initiative (BBI) which will address our main challenges as a country,” Ekuru told a political gathering in August this year.

In October 2017 before the repeat presidential election when the country was experiencing all manner of political instability, Atwoli was the first prominent individual to suggest the formation of a committee comprising of politically connected individuals to help restore order in the country.

At the time, the National Super Alliance (NASA) led by Orange Democratic Movement (ODM) leader Raila Odinga was getting a lot of traction with its weekly protests over what it described to be perennial electoral injustices and a failed government.

His suggestions have proved to be prophetic since Wako and the senior Haji currently sit on the BBI committee which is expected to reveal its findings and suggest it’s recommendations on the country’s best way forward to the public imminently.

It remains to be seen whether Atwoli’s prophecy on Ruto’s presidential bid will come to pass.

Read>>> Murathe: DP Ruto too graft tainted to be president