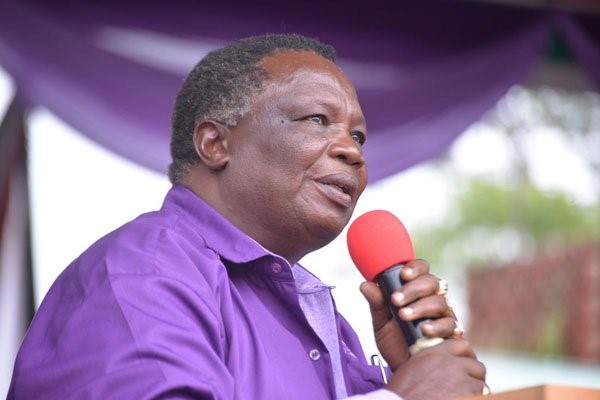 The veteran trade unionists has 17 biological children and supports 74 others from less fortunate families with e*******n and upkeep.

His children have the best life can offer. His daughter with his estranged wife, Roselinder Simiyu, studied aviation course in South Africa at a cost of Ksh22 million and now works for a local airline as a pilot, while the last born son is studying at an international school in Kitengela. The other daughter, meanwhile, studies law at Mt Kenya University.

Appearing on Citizen TV JK Live programme on Wednesday of August 15, Atwoli disclosed that his watch alone cost him a mind-boggling Ksh5 million, which he says he paid in installments, betraying his taste for fine stuff. “My watch is pure gold and it cost me more than 5 million,” he said.

Barely a week ago, KTN news anchor Mary Kilobi affirmed her marriage to Atwoli. His newest wife already owns a house and drives a top of the range car.

With this kind of lifestyle, you’d expect his family members to be a happy lot. Yet Roselinder, Atwoli’s second wife, is furious, accusing the COTU Secretary General of neglecting her and their children.

Roselinder, an unsuccessful aspirant for Webuye West Parliamentary seat in the 2017 general elections, makes raft of a*********s against Atwoli including failing to pay school fees for their children and providing for the family in leaked phone conversations that have thrown thrust him into the spotlight yet again.

The audio conversation and text messages, Roselinder laments how she lives from hand to mouth (even selling her land) as Atwoli, believed to be a billionaire, enjoys lavish lifestyle away from their upcountry home in Kakamega.  She even claims her former husband wears a Ksh1 million coat!

The woman sounds desolate and in need of her husbands financial support.

It is understood, however, that despite their separation, Atwoli provides for the children and continues to play his role as a father. “Atwoli ensures that she (Roselinder) gets money for upkeep but if that is not enough to finance her expensive lifestyle, she should perhaps get other men to do that,” says a close friend of Atwoli, who requested not to be named to protect his relationship with the family.

The two separated on mutual grounds a few years ago since they could not agree on her political ambitions to become an MP which, according to family sources, Atwoli was strongly against.

“He continues to play his role as a father to his children,” said the family friend.  If he has taken care of his more than 15 biological children as well as supporting 74 others from less fortunate families, why would he fail to take care of one child?

In fact, Atwoli bought land and built a house for Roselinder in Kakamega County, unfortunately they fell out shortly after, though she still lives there. “The guy was kind enough to even involve her extended family members to resolve their differences but she did not have the goodwill, abusing every step of these efforts and hardly available to consult other than busy with her campaigns in Webuye.”

The friend said Atwoli has since moved on with my life and married another woman and “would not want to be distracted by her unfounded claims.”

NEXT: THE MOST OVERLOOKED FACTOR IN SUCCESS

How To Use Crypto Casinos In Kenya: Important Things To Know