Kenyans will receive a much-welcome treat to a highly sought-after commodity early next month. On 3rd July, 2017, online Shopping Mall Jumia will start selling the two-kilogramme maize flour packet for just Ksh45 2kG, half the price of the government subsidized edition which retails at Ksh90, and the cheapest in the market.

This will be major relief for many Kenyans who can’t find the flour due to a biting shortage in the market. The online mall will offer the low price for a week to on the Soko brand to celebrate its fifth anniversary in Kenya, during which it will sell other products at a throw-away price to thank its customers.

Jumia’s offer will be valid for only seven days, between July 3rd to July 9th, 2017.

Jumia was established in Kenya five years ago and is now market leader in online retail for mobile phones, fashion brands, electronics, appliances and other commodities. “Yes. It’s true. From 3rd – 9th July we shall be selling Soko Maize flour at Ksh45 for 2KG,” Jumia said through a tweet posted on Wednesday, 21st June.

The online retailer will also extend its generosity to the Muslim community through Tuskys supermarket over the Ramadhan period by selling the 2KG packet at Sh80, ten shilling less than the current market price.

Also See: Bamboo is the newest path to millions

The move is seen as a way of attracting more shoppers to its online portal.  Supply of the subsidized maize flour has been unable to meeting growing demand caused by panic buying whenever stocks are made available in supermarkets. 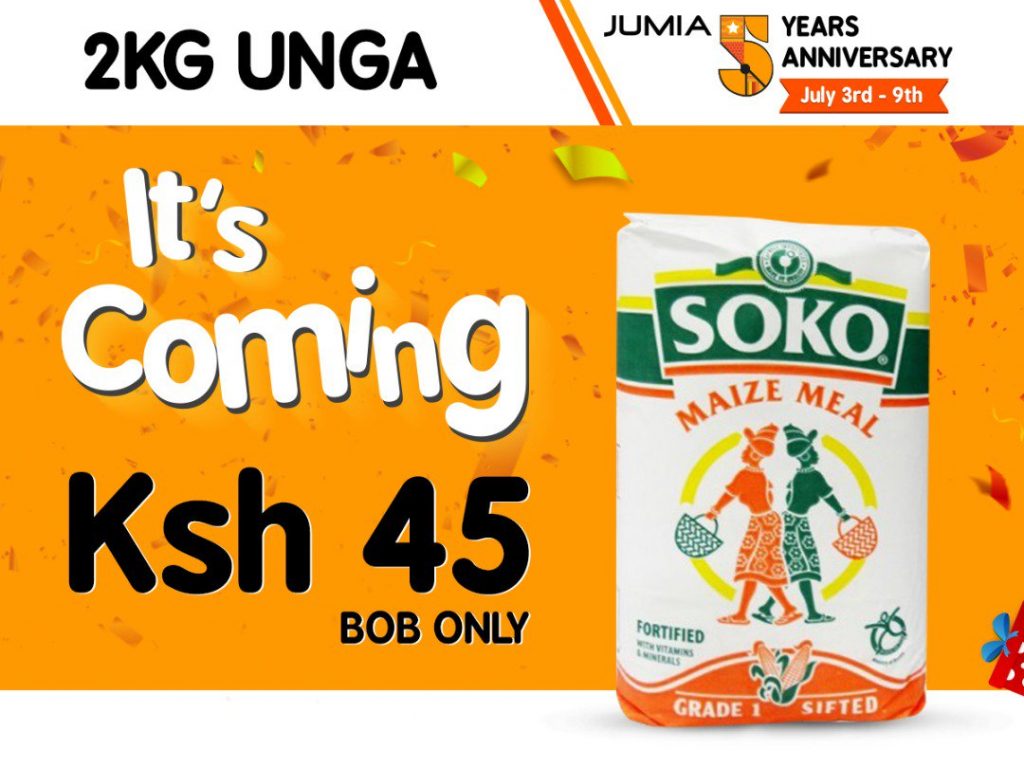 In May, a total of 990,000 bags of 90 kilograms each of tax-free maize is estimated to have been imported from Mexico through South Africa, and sold to local millers for the processing of the Sh90 flour to cub the current maize flour shortage. A gazette notice published on May 12 effectively waived all duty on all sugar, maize and powdered milk products.

Jumia has also announced over 15,000 deals of discounted products during that period which include 1kg Blueband at Ksh160, mobile phones, foodstuff, beauty products and clothes.

Other than white maize for human consumption, the Agriculture Permanent Secretary Dr Richard Leresian Lesiyampe said that a total of 15 animal feeds millers had been identified to import four million bags of yellow maize by September.