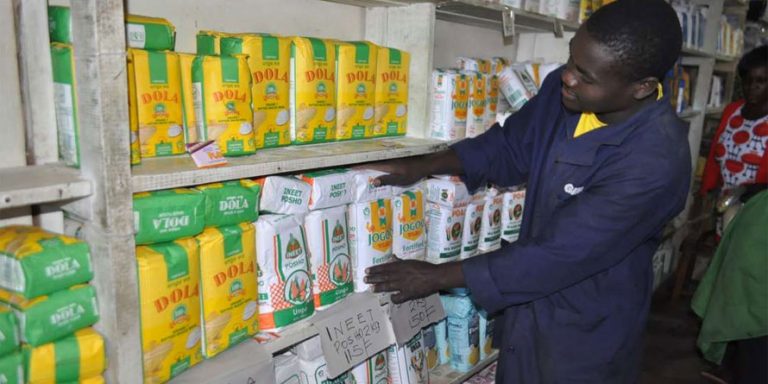 It has now emerged that some cartels have resorted to buying maize flour from supermarkets and selling it higher price than the Sh90 set by the government. Capital FM reports that even though the subsidised maize flour has a GoK stamp, the cartels continue to blatantly ignore it, and sell it a higher price at the expense of the public.

A spot check by Capital FM reveals that a 2kg packet with the Sh90 price tag is being sold as high as Sh60 more in kiosks and mini-supermarkets. A case in point is in Kawangware where maize flour is being sold at Sh160 and in other areas at a Sh100 but in that instance, one has to buy something else worth more than Sh50.

The cartels are using unorthodox means to purchase the maize flour from supermarkets, where one person in most of the places can only buy two packets. In one of the supermarkets, 5,000 bales of flour were delivered on Friday, but the supply was exhausted within a few hours by the cartels.

And when tracked down, it emerges some crooked traders have been hiring several people to buy the flour which in return is supplied to small shops at a higher price. The situation has been complicated even further since the maize supply to millers is yet to stabilise, according to Retail Trade Association of Kenya Chief Executive Officer Wambui Mbarire.

She says supermarkets have played their role by limiting the numbers of unga packets one can buy, a move being jeopardised by the greedy traders who want to make a kill out of the crisis.

See Also: Smart ways of getting enough supply of unga

“We have been promised that more maize is coming in the country in the coming weeks and we hope perhaps we will have more maize available,” she said during an interview with Capital FM News. “Once there is a continuous flow, we will stop what I consider as panic buying.”

“For somebody to be able to be buying in bulk, they must be using very unorthodox methods to ensure that they have a lot of flour in enough quantities to be able to stock a kiosk with it. It would be something we would not be able to point out on who is buying because for us anyone who is coming to the shop (supermarket) can only walk out with two packets.”

With proper planning, Mbarire says the country can avoid such crises in the future. This will start by cracking down on the maize cartels, whom she says, “have always existed.”

She says there is a need for massive investment in agriculture, which forms the backbone of the country’s economy if the perennial food shortage problem is to be eliminated. “The government must work to ensure our farmers are well remunerated, given the right implements, fertilizer, so that the government is able to collect enough maize to be put in the national silos.”

Once the Galana-Kulalu irrigation scheme comes to fruition, she said the situation will improve.

Next Read: Unpacking the secrets of the GoK’s Sh90 unga

President Uhuru Kenyatta assured Kenyans that the measures taken by the government will ensure the cost of living reduces and that all citizen have enough food for their families. “We have ordered enough maize and once it reaches to all homesteads I don’t what our opponents will say because they have used this issue to propagate propaganda and lies,” said the President.

And according to Deputy President William Ruto, the country has imported 13,000 metric tonnes of maize from Ethiopia, to compliment what was bought from Mexico. (Copyright: Capital FM)