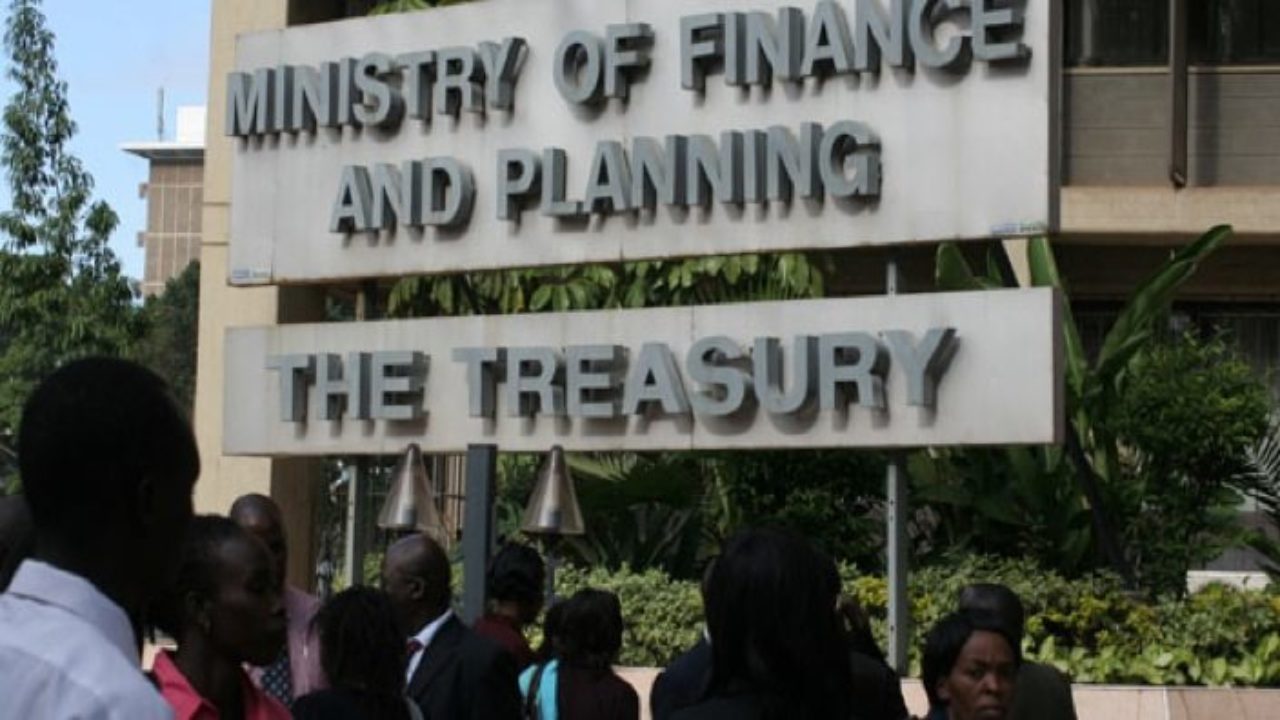 The Treasury. There are several scandals that have rocked Kenya from Jomo Kenyatta to his son Uhuru’s governments. [Photo/Bizna Kenya]

This is in a report by the Africog which adds that corruption has moved stepwise from “petty or bureaucratic” to “grand or political” and eventually to state capture.

With this shift, the state has become a “zone for personalised appropriation”.

The report; State Capture: Inside Kenya’s Inability to fight Corruption details how politics and corruption have always been intimates in Kenya since independence.

“Little wonder that the first commission of inquiry appointed after independence, the 1965 Chanan Singh Maize Commission of Inquiry, was triggered by a corruption scandal involving Paul Ngei, the then Minister for Marketing and Cooperatives.”

The report highlights that Ngei had permitted his wife Emma Ngei, through her company Uhuru Millers of Kangundo (commonly referred to at the time as Emma Stores) to directly buy maize from farmers, bypassing the Maize Marketing Board, which he chaired.

“This was despite the fact that the law did not allow Kenyans to buy maize straight from farmers which would be (cheaper than buying from the government). Worse still, Ms Ngei was permitted to buy 2,000 bags of maize, but she refused to pay for them, marking payment demands as ‘return to sender’. She refused to remit the differential between the farmer’s and the government prices to the Board, which too was against the law.”

The report notes that the widespread speculation in maize by well-connected individuals, combined with official failure to import more maize in time led eventually to a national shortage.

President Jomo Kenyatta then appointed a commission of inquiry to investigate the cause of the maize shortage.

“Ngei, because of his relationship with Uhuru Millers (owned by his wife) was briefly suspended from the Cabinet, but was later reinstated,” notes the report.

With this, the scandal that is unga politics began.

“Maize, then, before and since has had a long career in both politics and corruption.”

This was among many other scandals which hit the Kenyatta senior government.

With his failure to uphold the rule of law, the report notes that that first scandal set the tone for future graft where the politically connected rig the system to benefit themselves, their relatives and their cronies.

“When they are outed, they resort to inconclusive methods of investigation such as commissions of inquiry, task forces or inept prosecutions.”

The reports highlights notes that the first corruption scandal encompassing major characteristics of state capture was the Turkwel Gorge hydro-electric power project between 1986 and 1991.

Many aspects of the process of contracting for this project entailed rigging and repurposing legal processes for the benefit of President Daniel Moi and his cronies.

According to an internal European Commission Memorandum of March 1986 written by Achim Kratz, the then Commission’s delegate to Kenya, the contract price for the project was more than double the amount Kenya’s government would have paid under an international competitive tender.

The memo stated that the government knew that Spie Batignolles, the French contractor’s price was extortionate, but hired them nevertheless, “because of high personal advantages”.

“Those “personal advantages” were millions of dollars paid to President Moi and to the then Minister of Energy, Nicholas Biwott.”

Moreover, companies associated with people close to Moi and Moi’s family were sub-contracted to execute many elements of the Spie Batignolles contract.

The study says that some of the lessons learnt from the Turkwel Gorge saga on repurposing state institutions and lawful processes to extract regime and personal gain would be applied with a vengeance to the first unambiguous case of state capture: the Goldenberg scandal.

“Goldenberg and other post-1992 state capture scandals marked a watershed in corruption politics: that is, “a shift from a politics of state-led control” to “a politics of competitive aggression, the principal victim of which has been the state itself”.”

In this dispensation, politics “has become a pursuit of ever faster forms of enrichment”.

“These scandals challenge both the theory of democratic consolidation and the supposed ‘curative’ effects of democracy on political corruption.”

Notably, Kenya under democracy has transformed from “a moderately corrupt society to a pervasively corrupt society” and corruption has moved stepwise from “petty or bureaucratic” to “grand or political” and eventually to state capture. With this shift, the state has become a “zone for personalised appropriation”.

The most infamous scandal under Moi was the Goldenberg which led to Kenya losing an estimated Ksh 158.3 billion which was transacted with 487 companies and individuals.

Goldenberg International, jointly owned by Kamlesh Pattni who now runs a church and the then director of the special branch, (Kenya’s secret service) James Kanyotu, oversaw the deals that defrauded Kenyans.

“The total cost of the scandal is unknown, but some estimates are that up to 10% of Kenya’s GDP was lost.

The study notes that the scandals have been in successive governments and in 2003, when President Mwai Kibaki succeeded Daniel arap Moi, he quickly set up a commission of inquiry into the Goldenberg scandal.

But his government was not immune and at the same time he was setting up to investigate Moi, his cronies were busy siphoning monies out of Kenya under the Anglo Leasing scandal.

The 2003 Anglo Leasing scandal was a series of security related scandals involving 18 state security contracts. All these were collectively worth about US$770 million (Kshs 55 billion).

“Thirteen of the eighteen contracts were made under President Moi while the other five after 2002, under President Mwai Kibaki. The true identities and whereabouts of the companies remained unclear. Though the immediate investigation that blew open the scandal involved the Anglo Leasing and Finance Company, in truth the scandal involved many more companies owned by the same set of individuals: Deepak Kamani; Anura Perera; Amin Juma; Merlyn Kettering and Ludmilla Katuschenko.”

Less than a year after he was elected president in March 2013, Uhuru Kenyatta went to the international money markets to issue Kenya’s first sovereign bond worth US$2.75 billion.

This was done in two tranches. The first issue raised US$2 billion (Kshs176 billion at the time) and the second another US$815 million (Kshs 74 billion) for a total of US$2.8 billion (Kshs 250 billion).

The government said that the money would be used to reduce official borrowing from the domestic market which would spur private investment by lowering interest rates.

“According to an analysis by economist, David Ndii, the government executed two transactions from the offshore account into which the US$2 billion had been credited. It paid off a pending loan of US$604 million (Kshs 53 billion) and then transferred US$394 million (Kshs 35 billion) to the exchequer. That left US$1.002 billion (Kshs 88 billion) in that account. The government has never accounted for this money.”

The study says, “When inconsistencies were pointed out the government responded with both lies and insults.  The lies were that up to Kshs 120 billion had been used partly to pay pending bills to road contractors and partly for budget support. But as Ndii points out, the recurrent budget for the 2014/2015 financial year was funded by domestic revenues: the government raised Kshs 1.106 trillion in revenues, of which Kshs 229 billion was transferred to the counties. That left Kshs 877 billion for national government functions. The national government’s recurrent budget for that year was Kshs 897 billion, a mere Kshs 20 billion more than the revenue, reflecting no inflow of the Kshs 120 billion as claimed. According to this logic, the national government required only Ksh 20 billion more than what it had earned through revenue, so there was no way it could have used the Ksh 88 billion from the bond.”

The scandals are just a few of those that managed to hit the headlines on an international scale. Many more have happened and being investigated under Uhuru.

However, a lot remains to be seen on his resolve to right the wrongs that have been meted against Kenyans by consecutive governments starting with his father’s.

Read >> With New CEO, is Safaricom at War with Itself?