A new research shows how politicians either directly or indirectly have a stranglehold in the country’s media industry, a move that influences editorial operations.

Currently, there are 167 radios, 60 TV stations and nearly 100 publications, both online and offline, according to Media Council of Kenya Programmes Officer Victor Bwire. However, the main newspapers, TV and radio stations are in the hands of politicians or their close associates, according to a report by Odipo Dev.

According to its research, close to 37% of all newspaper, TV and radio entities in Kenya have ownership that they identified to be exposed to proven political influence either directly or indirectly.

President Uhuru Kenyatta’s family has a stake in Mediamax Network Ltd, which owns K24 and Kameme TV, the free-sheet People Daily and a host of radio stations, including Milele FM and Kameme FM. Deputy President William Ruto is now believed to be the majority shareholder in the media house.

Former President Moi’s family has a substantial stake in Standard Group, which owns KTN TV and The Standard newspaper, among others. Another key shareholder is Moi’s personal assistant Joshua Kulei, who is also politically influential in the Rift Valley.

The Nation Media Group, whose majority shareholder is His Highness the Aga Khan, has previously been accused of playing key roles in influencing political happenings in the country.

Business tycoon SK Macharia owns the Royal Media Services, which operates Citizen TV, Inooro TV, and 14 radio stations. He has previously used his media might to influence election outcomes, including in 2002 when he openly campaigned for Mwai Kibaki and 2013 when he supported Raila Odinga.

Radio Africa Group is partly owned by Kenya National of Commerce and Industry chairman Kiprono Kittony. The station owns the Star newspaper, Kiss TV and a host of FM radio stations, among them Classic 105 and Kiss 100. His mother, former Nominated MP Zipporah Kittony is a relative of Moi. Former Nairobi Governor Evans Kidero also has a shareholding in the company. 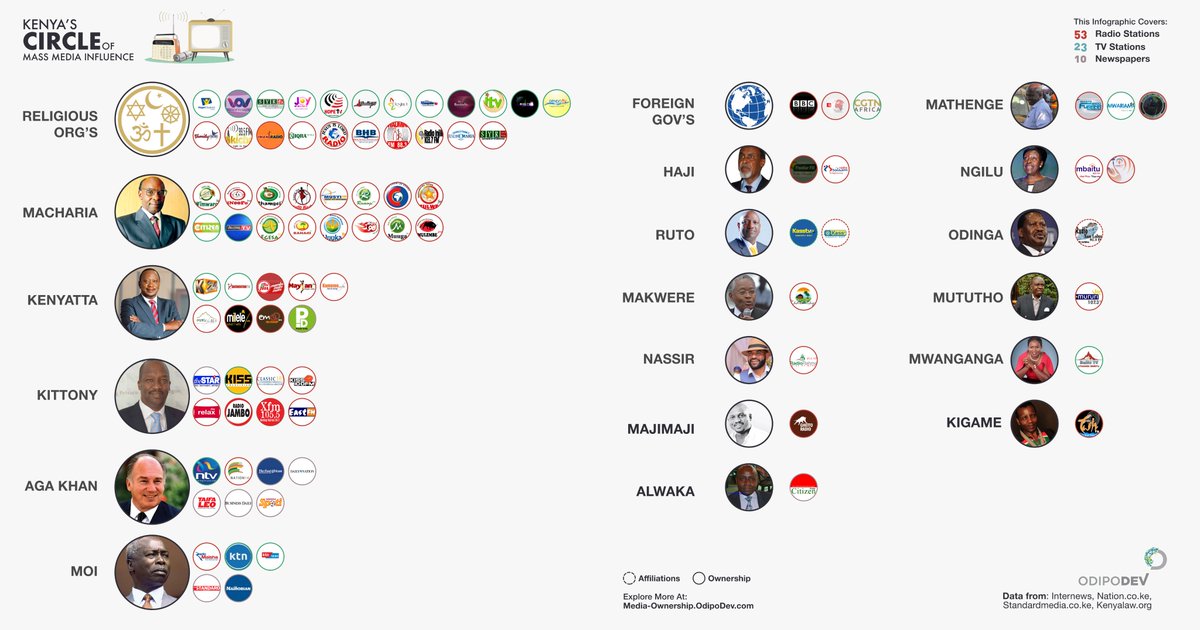 Ghetto Radio is owned by the Ghetto Radio Foundation, and their Chairperson is Maria Mbeneka, First Lady of Laikipia County, Julius Owino (Maji Maji) who we mentioned earlier is their Managing Director.

Odipo Dev notes that mass media influences how facts are viewed and debated in a society, contributing to crafting its public opinion, noting that independence and pluralism of media, opinions and views – including criticism of people in power – is a fundamental hallmark of a healthy democratic system.

“In today’s rabid information ecosystem, the public is forced to be extra prudent with the information they consume; not only for the facts therein but for the agenda the message may carry. To be truly complete, this due diligence process must extend to unmasking the ownership of media houses. By revealing who lies behind the editorial curtain and understanding their interests, reputation and affiliations, we get to judge the output of a media entity even more accurately. How much does a media owner interfere with editorial decisions? Are there any obvious biases favoring or maligning certain individuals or entities? Are journalists inhibited from covering certain stories?” it adds.